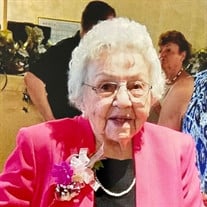 ATTLEBORO - Yvonne Poirier Rice, died peacefully at the age of 106 on Friday January 29th after a brief illness. She was a long-time resident of Attleboro and Communicant of St. John the Evangelist Church. Yvonne was born in Fitchburg, Massachusetts to the late Fidele and Josephine (Goguen) Poirier, immigrants from New Brunswick, Canada. In 1933 Yvonne married Leo Poirier, and together they raised six children. Leo died in 1970, and in 1981 Yvonne married Howard Rice, with whom she shared many happy years before his passing in 1994. They were enthusiastic travelers and dancers, and Yvonne credited her longevity to her many years enjoying line dancing. Yvonne is predeceased by her two eldest daughters, Claire Y. Poirier, and Sr. Jeanne Poirier, SUSC. She is survived by her son, Paul Poirier and his wife Honora, son Robert Poirier and his long time friend Wes Cuyler, son, John Poirier and his wife Carol Sandberg, and daughter, Linda Pyne and her husband Glenn. She is also survived by five grandchildren, Martin, Robert, and Daniel Pyne and Allison and Anna Poirier; four great-grandchildren Jack, Abigail, Maya, and Izabelle; and several nieces and nephews. As the last surviving of her 13 siblings, Yvonne played an important role as matriarch of her extended family. Known as “Memere” to most, she served as a significant role model to many nieces and nephews, keeping future generations connected to their heritage. Yvonne instilled in all her children, grandchildren, and great-grandchildren her deeply held values of faith and family. Yvonne was extremely proud of the educational and career achievements of all her children and grandchildren. The family expresses its sincere thanks to Dr. Jean Sidall-Bensson and Pat Zullo who provided Yvonne’s medical care with kindness in her senior years. Also, the family is grateful for all the caregivers who extended their support to Yvonne over the past two months of convalescence: the staff at Brookdale of Attleboro, the staff at Hope Health Hospice, the staff at ComforCare and the staff at Madonna Manor. In lieu of flowers, donations can be made to the Madonna Manor, Hope Health, the Catholic TV network of Boston or charity of one’s choice. A Mass of Christian Burial will be held at 10 a.m. on Wednesday, February 3, 2021 followed by burial at St. Stephen’s Cemetery, Attleboro. To ensure everyone’s safety during the Covid pandemic, both will be private. A live streaming of the Funeral Mass will be available at https://my.gather.app/remember/yvonne-rice A celebration of Yvonne’s life will be held at a later date.

ATTLEBORO - Yvonne Poirier Rice, died peacefully at the age of 106 on Friday January 29th after a brief illness. She was a long-time resident of Attleboro and Communicant of St. John the Evangelist Church. Yvonne was born in Fitchburg, Massachusetts... View Obituary & Service Information

The family of Yvonne Poirier Rice created this Life Tributes page to make it easy to share your memories.

ATTLEBORO - Yvonne Poirier Rice, died peacefully at the age of...