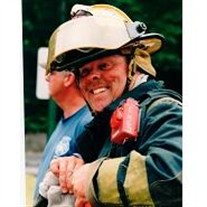 ATTLEBORO- William J. (Goodinson) Sproul AFD, 56, of Attleboro, passed away on Saturday, October 27, 2018, after a valiant battle with cancer, at his home, surrounded by the love, comfort, and care of his beloved and devoted family and fellow firefighters. He was the dedicated husband for 24 wonderful years to the love of his life, Christine Ann (Wheelock) Sproul, of Attleboro. Born on December 17, 1961, in Attleboro, William was the loving son of the late Timothy Goodinson and Ruth Ann (Sproul) Daviau. William was raised in Attleboro and attended Attleboro Public Schools, graduating from Attleboro High School as a member of the Class of 1980. Following graduation, William proudly made the decision to enlist in the United States Army. He served in the Army and the MA National Guard Reserve for over 22 years. During his time in the military, William gained valuable skills working with tanks as a Tank Systems Mechanic, while also achieving the rank of SSGT. Over the course of his military service, William was the well deserving recipient of the Army Commendation Medal; Army Achievement Medal with 4 bronze oak leaf clusters; National Defense Service Medal and the Armed Forces Reserve Medal. Following his stint of active duty with the United States Army, William decided to give back to the city he grew up in by serving on the Attleboro Fire Department. For over 34 years, he built quite the reputation for being a hard worker and good firefighter. William was very proud to work with many brave men and woman on the fire department, especially his own son, Josh. William attended Centenary United Methodist Church and he was also a member of Attleboro Elks Lodge #1014. In his spare time, William was an avid outdoorsman. He liked to go fishing, camping, and relax at the beach. He also loved working and fixing up cars, along with riding motorcycles. In addition to his dear wife, William is survived by his cherished children, Jessica Leigh Ferrini and her husband Blake of Newbury, FL, Jason Daniel Sproul of Foxborough, Joshua Adam Sproul AFD; his brother, Dale Goodinson and his wife Vivian of Dennis; his 6 grandchildren; his 2 nieces and 3 nephews; and also many extended family members, friends, and fellow firefighters. Relatives and friends are invited to attend a visitation on Thursday, November 1, 2018 from 4 to 8 p.m., in the Duffy-Poule Funeral Home, 20 Peck Street, Attleboro. A funeral service will take place on Friday, November 2, at 10 a.m. at Centenary United Methodist Church, 39 North Main Street, Attleboro. There will be no funeral procession from the funeral home prior to the commencement of the church service. Burial with military honors will take place at North Purchase Cemetery, 825 North Main Street, Attleboro following the funeral service. In lieu of flowers, donations in William’s memory may be made to Special Signal Fire Association, aka Providence Canteen, PO Box 25009. Providence, RI 25009 or the RI Professional Firefighters Pipes & Drums, 92 Printery Street, Providence, RI 02904.

ATTLEBORO- William J. (Goodinson) Sproul AFD, 56, of Attleboro, passed away on Saturday, October 27, 2018, after a valiant battle with cancer, at his home, surrounded by the love, comfort, and care of his beloved and devoted family and fellow... View Obituary & Service Information

The family of William J. (Goodinson) Sproul AFD created this Life Tributes page to make it easy to share your memories.

Send flowers to the Sproul family.