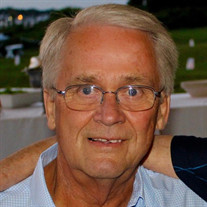 William E. Henriques,78, passed away on December 28, 2019 with his loving family by his side. A lifelong resident of Attleboro, MA, he graduated from Attleboro High School in 1959. He worked for many years in sales and as a sales manager at Banner Oldsmobile Buick in North Kingstown, RI and Volkswagen of North Attleboro. There he enjoyed engaging with customers and forming lifelong friendships. Bill was a passionate Boston sports fan, and enjoyed telling the story of his first trip to Fenway Park with his father. He continued this tradition by taking his own family to experience the same joy he felt while being in the ballpark. You would regularly find Bill catching the Attleboro High School football game on a Friday night, or sitting in the stands watching the kids play basketball. Bill was his grandkid’s biggest fan; they were never surprised to see him on the sidelines. He also developed a love of golf at a young age. He enjoyed many rounds with his good friend Kevin, and played in several leagues with his son, Steven. Most important to Bill was his family. He was the son of the late John P. S. Henriques of Providence, RI and Ruth B. (Qvarnstrom) Henriques of Attleboro, MA. He is survived by his devoted wife Judith (Langton) Henriques. He was the loving father to four children, Steven Henriques and his wife Vicki of Cumberland, RI, Stacey Despathy and her husband Brant of Duxbury, MA, Kimberly Sweeney and her husband Brian of Attleboro, MA, and Robyn Rodden and her husband Eric of North Attleboro, MA. Bill’s greatest passion lies with his ten grandchildren Steven, Eric, Kaylee, Riley, Madison, Alexandra, Parker, Jackson, Griffin, and William and 2 great grandchildren, Kaysen and Steven. Bill was a best friend and dear brother to John Henriques of Warwick, RI and Susan Erdman of Reston, VA. He inherited a love of the ocean from his great great grandfather, Captain John Ashcraft Henriques, The First Superintendent of the United States Coast Guard Academy. Bill was tremendously proud when a room at the Academy was named in his family’s honor in September of 1976. As a child, Bill spent his summers in Westport, MA, rarely spending time out of the water. After having his own family, Bill enjoyed summers in Chatham, MA where his children continue the tradition with their own families. Every Sunday was a beach day and the day didn’t count until everyone dove into the crashing waves. The people that knew Bill are forever thankful for his unwavering generosity, compassion, and a sense of humor. His contagious smile and vibrant spirit will live on in the people whose lives he touched. Relatives and friends are invited to attend a visitation from 6 to 8 pm on Friday, January 3, 2020 at Duffy-Poule Funeral Home, 20 Peck Street, Attleboro, MA. A funeral will be held on Saturday, January 4, 2020 at 10 am, All Saint’s Episcopal Church, 121 North Main Street, Attleboro, MA. Burial will be private. Donations can be made in William’s memory to the Dana Farber Cancer Institute, 450 Brookline Avenue, Boston, MA 02215. or at dana-farber.org under ‘donate now’.

William E. Henriques,78, passed away on December 28, 2019 with his loving family by his side. A lifelong resident of Attleboro, MA, he graduated from Attleboro High School in 1959. He worked for many years in sales and as a sales manager at... View Obituary & Service Information

The family of Mr. William E. Henriques created this Life Tributes page to make it easy to share your memories.

Send flowers to the Henriques family.