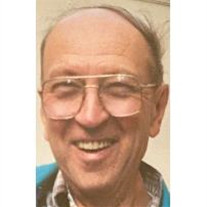 Attleboro - Warren Joseph Burt, 89, a lifelong resident of Attleboro passed away Tuesday, August 18, 2020 at Rhode Island Hospital, Providence, RI. He was the beloved husband of Louise J. (Plante) Burt of Attleboro. Born April 18, 1931 in Attleboro he was a son of the late Charles Warren and Cora Agnes (Gosslin) Burt. A lifelong resident of Attleboro, Warren was raised and educated in Attleboro. Upon graduation from high school, Warren enlisted in the United States Army and served honorably as a Military Police Officer during the Korean War. Following active duty Warren spent another 2 years in the Army Reserves where he would complete Universal Military Training. Warren returned to Attleboro and began his long career as a Pressure Bonding Furnace Operator. He worked for both Metals & Controls and Texas Instruments for over forty years. He proudly retired in 1990. In addition to his wife, Warren is survived by his daughter, Wanda L. Burt of Attleboro and his son, Warren C. Burt of Attleboro; his grandchildren, Justin C. Burt and Brittney A. Burt; brother, Raymond F. Burt of Rotunda West, FL and many nieces and nephews. Warren was predeceased by his sister Florence (Burt) Placido. Relatives and friends are invited to attend a visitation on Sunday, August 23, 2020 from 2 to 6 p.m. in the Duffy-Poule Funeral Home, 20 Peck St., Attleboro. A funeral will be held at 10 a.m. on Monday, August 24, 2020, at the funeral home followed by Mass of Christian Burial at 11 a.m. in St. John the Evangelist Church, 133 North Main St., Attleboro. Burial with military honors will follow at St. Stephen’s Cemetery, 683 South Main Street, Attleboro. For the safety of those who wish to pay their respects, please do so in accordance with CDC, Federal and State guidelines including social distancing and the use of face masks.

The family of Mr. Warren Joseph Burt created this Life Tributes page to make it easy to share your memories.

Send flowers to the Burt family.