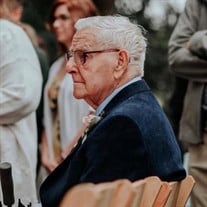 Walter S. LaMay, 95, of Colrain, formerly of Attleboro, passed away peacefully on Friday, April 23, 2021, at home in Colrain, MA with family by his side. He was the beloved husband of the late Phyllis J. LaMay, who he met in grade school in Attleboro, MA. They spent almost 70 blissful years together as husband and wife. Born on October 3, 1925, in Attleboro, MA, he was the son of the late Arthur and Margaret (Benson) LaMay. Walter served in the United States 345th Army Corp of Engineers in Italy during World War II. After the war ended, he joined the Attleboro Fire Department in 1947. He was later appointed Captain and worked until he retired in 1978. Walter also worked for Leach & Garner in Attleboro, MA, for many years as the lead industrial electrician. Walter was a member and a Deacon of the Second Congregational Church in Attleboro for many years before moving to Colrain in 2017. He had many skills, and even built his family home where he resided with Phyllis and his children for 66 years. During retirement, he and Phyllis enjoyed traveling and visiting with friends. He also enjoyed bird watching, playing cards, and was a skilled crossword puzzle solver. He is survived by his children, Carol Sacco and her husband Joseph of Colrain, Donald LaMay and his wife Sharon of Norton and Wally LaMay of North Attleboro; his grandchildren, Amy Collins and her husband Matt of St. Mary’s, WV, Cassandra Landin and her husband Aaron of Shakopee, MN, Katherine Sacco and her husband Tyler Pless of Turners Falls, Christopher LaMay and his fiancée Casey O'Shea of Cranston, RI, Lindsey Winslow and her husband Tyler of Blackstone, Laura Ellen Sacco and her husband Everett Rauch of East Brookfield, Althea Rose Sacco of Amherst and Danielle Kegley of Attleboro; his six great grandchildren, Koa Diaz and Leah Landin of Shakopee, MN, Sophie Collins and William Collins both of St. Mary’s, WV, Carter Winslow of Blackstone, and Arden Rauch of East Brookfield. Walter was predeceased by his brother, Eugene LaMay, and two sisters, Mary Henderson, and Marjorie (Leach) Vickery. Relatives and friends are cordially invited to attend visitation at the Duffy-Poule Funeral Home, 20 Peck Street, Attleboro, Friday, April 30, from 9-11 AM. Funeral Service will be conducted at 11 AM followed by a burial at Oak Knoll Cemetery, Rehoboth, officiated by the Reverend of the Second Congregational Church in Attleboro. In lieu of flowers, donations in Walter's name may be made to the National Audubon Society at https://www.audubon.org/ For the safety of those who wish to pay their respects, please do so in accordance with CDC, Federal and State guidelines including social distancing and the use of face masks.

Walter S. LaMay, 95, of Colrain, formerly of Attleboro, passed away peacefully on Friday, April 23, 2021, at home in Colrain, MA with family by his side. He was the beloved husband of the late Phyllis J. LaMay, who he met in grade school in... View Obituary & Service Information

The family of Mr. Walter S. LaMay created this Life Tributes page to make it easy to share your memories.

Send flowers to the LaMay family.