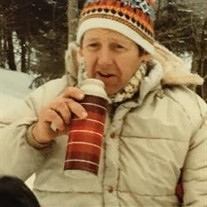 BETHLEHEM, NEW HAMPSHIRE- Walter J. Hyde, 84, of Bethlehem, New Hampshire, passed away peacefully at his home, with his daughter and daughter-in-law by his side, on Tuesday, April 23, 2019. He was the beloved husband to the love of his life, the late Dolores (Paquin) Hyde, who passed away after a battle with Parkinson’s disease, in the presence of her husband at her home, in 2008. Born on May 10, 1934, in Attleboro, Walter was the devoted son of the late Charles C. and Bridget V. (Kelly) Hyde. Walter was raised in educated in Attleboro. In 1987, he and his wife Dolores relocated to Bethlehem, NH. A man who took great pride in his work, Walter was employed for nearly 30 years by First National Supermarket. After the closing of the company, Walter worked for 12 years at Kelley’s Supermarket in Franconia, NH. He ultimately retired from Kelley’s Supermarket to take care of his dear wife, as she became ill. In his spare time, Walter kept busy with many interests and hobbies. He was an avid reader, who took particular interest in studying history and politics. He enjoyed watching the news, sports, and old movies on TV. Living in the New Hampshire wilderness, Walter was also an ardent outdoorsman, who loved to go camping and hiking. He took great pride in the upkeep of his home and he would frequently tackle projects of any kind, whether it was inside or outside of his beautiful home. Above all, Walter treasured the time spent and memories made with his wonderful and adoring family, especially spending two weeks every summer with his grandchildren. He will be greatly missed by everyone that had the pleasure of knowing him. Walter is survived by his proud and cherished children, Yolanda Hyde and Wayne Hyde and his wife Laura (Colgan); his grandchildren, Alyse and Brendan Hyde; his siblings, Beatrice (Hyde) Green, Patricia (Hyde) Fontneau, Catherine (Hyde) Turley, and Edward Hyde and his wife Anne (LaRocque). In addition to his wife and parents, Walter is predeceased by his siblings, Charles Hyde, Alice (Hyde) Savastano, Ralph Hyde, Eileen (Hyde) Lee, Shirley (Hyde) Maynard, and Joan (Hyde) Lavendier. Relatives and friends are invited to attend a visitation from 4 – 7 p.m. on Monday, April 29, 2019 at the Duffy-Poule Funeral Home, 20 Peck Street, Attleboro. A funeral will be conducted on Tuesday, April 29, 2019 at 9:15 a.m., from the Duffy-Poule Funeral Home, followed by a Mass of Christian Burial at 10:30 a.m. at St. Vincent de Paul Parish, 71 Linden Street, Attleboro. Burial will follow at St. John's Cemetery, Attleboro, where Walter will be laid to rest with his late wife. In lieu of flowers, donations in Walter’s memory can be made to the Pulmonary Fibrosis Foundation: 230 East Ohio Street, Suite 500, Chicago, Illinois 60611 or to https://www.pulmonaryfibrosis.org/ways-to-give/donate-now

BETHLEHEM, NEW HAMPSHIRE- Walter J. Hyde, 84, of Bethlehem, New Hampshire, passed away peacefully at his home, with his daughter and daughter-in-law by his side, on Tuesday, April 23, 2019. He was the beloved husband to the love of his life,... View Obituary & Service Information

The family of Mr. Walter J. Hyde created this Life Tributes page to make it easy to share your memories.

Send flowers to the Hyde family.