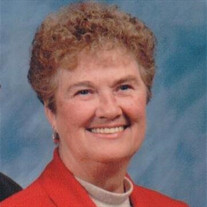 ATTLEBORO- Virginia “Ginny” A. Babin, 79, of Kissimmee, FL and formerly of Somerville, Saugus, and York, ME, passed away on Thursday, October 12, 2017, at her residence, surrounded by her beloved family. She was the loving wife of the late William E. Babin. Born on January 14, 1938, in Somerville, she was the devoted daughter of the late Francis and Beulah (Lowe) Dunne. Virginia was a graduate of Somerville High School. Ginny was employed with Liberty Mutual Insurance Company, working in both Boston and Portsmouth, NH. She celebrated her well-deserved retirement in 1993. She was a longtime member of the Sherwood Community Chapel in Kissimmee, FL. In her spare time, Ginny was an active member of the Red Hatter Society and she also enjoyed volunteering her time to the Sherwood Forrest community. Ginny is survived by her cherished children, William F. Babin and his wife Suzanne of Somersworth, NH and Nancy (Babin) Collins and her husband Chris of Attleboro; her grandchildren, Ashley and William A. Babin and Megan and Christopher Collins; also many cousins, nieces, nephews, and friends. In addition to her late parents and husband, Ginny was predeceased by her brother, George Dunne. Relatives and friends are invited to attend a Celebration of Life service for Ginny, which will be held on October 28, 2017, from 1-4 p.m., at Bella Sarno Restaurant, 553 Kelley Blvd, North Attleboro, MA 02760. In lieu of flowers, donations in Ginny's memory may be made to either the American Cancer Society, P.O. Box 22478, Oklahoma City, OK 73123 or to Community VNA Hospice, 10 Emory Street, Attleboro, MA 02703.

ATTLEBORO- Virginia &#8220;Ginny&#8221; A. Babin, 79, of Kissimmee, FL and formerly of Somerville, Saugus, and York, ME, passed away on Thursday, October 12, 2017, at her residence, surrounded by her beloved family. She was the loving wife of... View Obituary & Service Information

The family of Mrs. Virginia "Ginny" Babin created this Life Tributes page to make it easy to share your memories.

Send flowers to the Babin family.