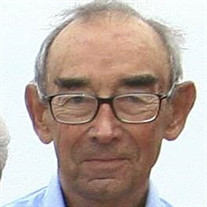 Tom (Frank Thomas) Westcott, 92, of 95 Mechanic Street, Attleboro, MA (14 years), previously at 38 Commonwealth Avenue (58 years), died peacefully at home surrounded by his family on February 15, 2018 Predeceased by the love of his life, Patricia, 68 years, he leaves behind his children Peter Thomas Westcott, Nancy Westcott Pocock and Deborah Auliya Westcott, his granddaughter Jemila Kester and great grandchildren Sarah Kester and Hannah Kester. Born September 12, 1925, he was the son of the late Frank Tourtellotte Westcott and Mildred Cullen Westcott of North Attleboro. Among his achievements, Tom was appointed by President Reagan to the EPA Advisory Committee for Municipal Water, elected chairman by his peers, and testified in Congress in 1985 regarding the Clean Water Act. With that testimony, he was significantly responsible for saving the Clean Water Act and received an EPA Special Achievement Award for his contribution. A graduate of MIT, while working for the Navy as an aeronautical engineer during WWII, Tom figured out how to eliminate the flame-outs occurring in steep climbs in jet engines which was one of the final developments before full scale production. It was a huge disappointment to him that the Navy would not let him fly any more once they saw his value to the program. A registered Professional Engineer since 1960, Tom was President/CEO of Westcott Construction Corporation since the 1950s, Chairman of the Municipal Utilities Committee of the Massachusetts American General Contractors (AGC), 1983 Chairman of the Municipal Utilities Committee of the National AGC of America, and elected Treasurer of AGC in 1987. Locally, Tom was one of the original founding committee members of the Hockomock YMCA and a trustee for years. He was the First President of Anawon Trust, now part of Bristol County Savings Bank, and an Honorary Trustee of the Woods Hole Oceanographic Institution. After Patricia, his second love was fishing and he was an avid member of the International Light Tackle Tournament Association, with active membership since 1951. He was a superb, award winning fisherman on Cape Cod and the Islands, Palm Beach and the Caribbean, with an active commitment to the Masters Angler Tournament as a committee member since 1964. Tom was a life force. His good humor, level headedness and unique perspective will be sorely missed and often remembered by all who knew and loved him. Relatives and friends are invited to attend a memorial visitation from 9 – 10 a.m. on Saturday, September 8, 2018 in the Duffy-Poule Funeral Home, 20 Peck Street, Attleboro. A funeral service will immediately follow the visitation at 10 a.m. in the funeral home. Burial will follow in Mount Hope Cemetery & Arboretum., North Attleboro. In lieu of flowers, please send donations to the Hockomock YMCA, 300 Elmwood St, North Attleborough, MA 02760.

The family of Mr. Tom (Frank) Thomas Westcott created this Life Tributes page to make it easy to share your memories.

Send flowers to the Westcott family.