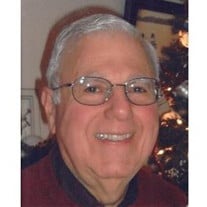 ATTLEBORO - Toby R. Anelunde, passed away peacefully after a long illness on Jan. 20th 2019. Born on October 4, 1935 in Attleboro MA, he was the son of the late James and Estrella Torres-Anelande. Toby was a long time resident of Attleboro and grew up on Louise Street, where his family owned a general store. He also spent much of his summers playing with his sisters at their Ocean Grove summer home. He graduated from Attleboro High School Class of 1953. Toby served 2 years in the U.S. Army and 4 years in the Army Reserves. He graduated from the Boston School of Practical Art in 1956 and married the love of his life, Claire Dominique in 1962. They had one child who he adored. He later attended Johnson & Wales University where he obtained a degree in Business Management. Toby retired from the Paramount Greeting Card Company after 28 years. He had a gift for joke telling, growing tomatoes, finding treasures with his medal detector, photography, and art, he was small in stature but had a big personality. He was sweet, kind, thoughtful and a true gentleman. Toby will be greatly missed, but he will forever be in our hearts. He leaves behind his beloved wife of 56 years, Claire L. Anelunde, daughter Laura S. Huntington, son-in-law Christopher and three grandchildren Dillon, Cameron and Paige Huntington. He also leaves a sister, Irene Hiatt along with many nieces and nephews. Toby was currently living on Cape Cod but will be brought back to his beloved city of Attleboro for services on Friday, Jan. 25th. Visiting hours will be 9:30-10:30 am at Duffy-Poule Funeral Home, 20 Peck Street, followed by a Mass of Christian Burial at 11 am at the St. Vincent de Paul Parish (aka Holy Ghost) 71 Linden St., Attleboro, MA. A graveside service will follow in St. Stephen’s Cemetery, 683 S. Main Street Attleboro, MA. In lieu of flowers donations in Toby’s name may be made to the Alzheimer’s Foundation of America, 322 8th Avenue, 7th Floor, New York, NY 10001.

ATTLEBORO - Toby R. Anelunde, passed away peacefully after a long illness on Jan. 20th 2019. Born on October 4, 1935 in Attleboro MA, he was the son of the late James and Estrella Torres-Anelande. Toby was a long time resident of Attleboro... View Obituary & Service Information

The family of Mr. Toby R. Anelunde created this Life Tributes page to make it easy to share your memories.

ATTLEBORO - Toby R. Anelunde, passed away peacefully after a...

Send flowers to the Anelunde family.