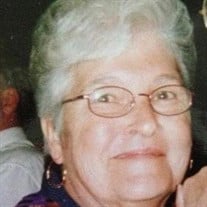 REHOBOTH- Theresa L. Copes, 85, of Attleboro, passed away on Sunday, April 14, 2019, at Sturdy Memorial Hospital in Attleboro. She was the loving wife for 59 wonderful years to the late Neil E. Copes, who passed away on June 8, 2013. Born on October 9, 1933, in Pawtucket, Rhode Island, she was the adored daughter of the late Thomas and Appolonia (Nyzio) Convey. Theresa attended and graduated from Rhode Island College with her Bachelor’s degree, as a member of the Class of 1955. For many years, Theresa worked in the City of Attleboro School Department. She had a passion for teaching and educating students. Theresa continued to remain involved in education as a member of the Attleboro Retired Teachers Association. She was a longtime communicant of Our Lady Queen of Martyrs Catholic Church in Seekonk. In her spare time, Theresa was an avid reader and sewer. She loved to go bowling, going to the movies and she enjoyed going out to lunch with her friends. Theresa also had a knack for traveling and for many years, she, along with her friends, Donald and Marion Smith went on many adventures. Above all, Theresa most appreciated making memories and spending treasured time with her dear family. Theresa is survived by her cherished children: Lynne Davis of Cumberland, RI, Joyce Mooney and her husband Edwin Mooney Sr. of Lincoln, RI, Edward Copes and his wife Lori of Attleboro, and Kenneth Copes and his wife Debbie of Rehoboth; her grandchildren, Kristin Farley of Cumberland, RI, Edwin Mooney Jr., of Lincoln, RI, Benjamin Davis of Cumberland, RI, Brian Mooney of Lincoln, RI, Karleen Desautell of Lincoln, RI, Casey Copes-Jeffrey of Attleboro, Haley Copes of Attleboro, Sarah Jeffrey of Rehoboth, and Jacey Copes of Attleboro; 12 great-grandchildren and also several nieces and nephews. In addition to her husband and parents, Theresa is predeceased by her granddaughter, Erika Davis; her brother and sister-in-law, Joseph and Anita Convey; her father and mother-in-law, Basil and Naomia Copes; and her son-in-law, Daniel Davis, who was married to her daughter, Lynne. Relatives and friends are invited to a Mass of Christian Burial which will be held on Monday, April 22 at 10:00 a.m. at Our Lady Queen of Martyrs Catholic Church, Coyle Drive, Seekonk, MA 02771 Burial will follow at Oak Knoll Cemetery, Tremont Street, Rehoboth, where Theresa will be laid to rest with her late husband. In lieu of flowers, donations in Theresa’s name may be made to the Rehoboth Ambulance Committee, 334 Anawan Street, Rehoboth, MA 02769 or directly to http://www.rehobothambulance.org/fundraising.php

REHOBOTH- Theresa L. Copes, 85, of Attleboro, passed away on Sunday, April 14, 2019, at Sturdy Memorial Hospital in Attleboro. She was the loving wife for 59 wonderful years to the late Neil E. Copes, who passed away on June 8, 2013. Born on... View Obituary & Service Information

The family of Mrs. Theresa L. Copes created this Life Tributes page to make it easy to share your memories.

Send flowers to the Copes family.