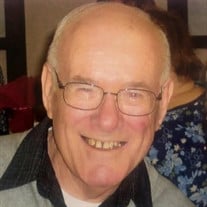 NORTON – Theodore Arthur Mohr, 79, a resident of Norton, passed away peacefully on Friday, October 30, 2020 at his home. He was the loving husband of Hazel Elizabeth (Betts) Mohr of Norton. Born on January 6, 1941 at his family home in Norton, he was a son of the late Theodore R. and Evelyn (Carter) Mohr. Ted attended Norton High School and was a lifelong resident of Norton. In 1968 he purchased the family home on South Worcester Street in Norton that he was born and raised in, residing here until his passing. He honorably served his country in the United States Army from 1966 – 1968. Ted worked for the St. Regis Paper Co. and then Fortifiber Corp. for 30 years before his well-deserved retirement. He was a proud member of the VFW Post 115 and the American Legion Post 20, both in Attleboro. Ted was a member of the Memorial Baptist Church in Seekonk. He was also a loyal patron of Bliss Restaurant in Attleboro for the past 50 years. In addition to his wife, Ted is survived by his daughter Elizabeth Mohr of Norton; his sister, Marilyn Franklin and her husband James of Attleboro. He was the brother of the late Shirley Mohr Ziegler and brother-in-law to the late Karl Ziegler. The family would like to thank the care and compassion given to Ted by the Community VNA of Attleboro Hospice and Palliative Care nursing staff. Relatives and friends are invited to attend a Visitation from 4 p.m. to 7 p.m. on Wednesday, November 4, 2020 at the Duffy-Poule Funeral Home, 20 Peck Street, Attleboro. A graveside service with military honors will be held at 10 a.m. on Thursday, November 5, 2020 at the Newell Burying Ground, 1502 West St, South Attleboro, MA. In lieu of flowers, donations may be made to the “Deacons Fund” c/o Memorial Baptist Church, 340 Central Ave, Seekonk, MA 02771.

NORTON &#8211; Theodore Arthur Mohr, 79, a resident of Norton, passed away peacefully on Friday, October 30, 2020 at his home. He was the loving husband of Hazel Elizabeth (Betts) Mohr of Norton. Born on January 6, 1941 at his family home... View Obituary & Service Information

The family of Mr. Theodore Arthur Mohr created this Life Tributes page to make it easy to share your memories.

Send flowers to the Mohr family.