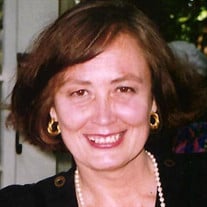 Susan K. (Armstrong) Boulay of Attleboro passed away peacefully on Saturday, February 5, 2022, at 76 years of age. Beloved wife of Ronald A. Boulay for 53 years, she said her marriage was “a love story about a little girl from the Bronx and a little guy from Fall River.” Daughter of Doris K. (Hayes) Armstrong, of Madison, CT, and the late Robert F. Armstrong. Loving mother of Dr. Brian R. Boulay and his wife Erica of Glenview, IL, and Patrick H. Boulay and his wife Nicolle of Herndon, VA. Cherished “Nana” of Lillian Boulay, Kevin Boulay, and Theo Boulay. Adored sister of Robert F. Armstrong, Jr., and his wife Ine van Moorsel of Sarasota, FL. Sister-in-law of William Leary and his wife Jeannine of Fall River. She will also be missed by her four nieces and several lifelong friends from childhood, college, Attleboro, and Waterville Valley, NH, where she skied for many years. Susan was born in the Bronx, NY, moved to Eastchester, NY, in 1959, and then to Attleboro in 1968. She attended the Ursuline School and obtained a Bachelor of Arts degree from Newton College of the Sacred Heart, where she continued to attend reunions until her death. She was a schoolteacher in Attleboro from 1968-1973 until devoting herself to raising her two sons. Susan was a Glee Club member at Newton College, a longtime member of the “Gourmet Girls” of Attleboro, and a communicant of St. John the Evangelist Church. Susan loved to travel and visited countries all over the world, often with her mother Doris. She was a skilled Scrabble player and a devoted Jeopardy watcher. Susan also enjoyed skiing with her family and friends, doing crossword puzzles, and reading. Despite her New York roots, she enjoyed cheering for the Red Sox and Patriots. Being a grandmother was one of the greatest joys of the last part of her life. Relatives and friends are invited to attend a Mass of Christian Burial on Saturday, April 30, 2022 at 11 AM at St. John the Evangelist Church, 133 Main St., Attleboro, followed by a luncheon at the St. John's Church Hospitality Center.

Susan K. (Armstrong) Boulay of Attleboro passed away peacefully on Saturday, February 5, 2022, at 76 years of age. Beloved wife of Ronald A. Boulay for 53 years, she said her marriage was &#8220;a love story about a little girl from the Bronx... View Obituary & Service Information

The family of Mrs. Susan K. (Armstrong) Boulay created this Life Tributes page to make it easy to share your memories.