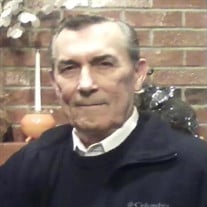 ATTLEBORO – Stephen Pitas Jr., 88, lifelong resident of Attleboro passed away at his home on Sunday, January 24, 2021. He was the devoted husband of the late Lorraine D. (Jones) Pitas. Born in Attleboro, MA on December 3, 1932, he was a son of the late Stephen and Margaret (Russell) Pitas and stepson of the late Frances (Swiech) Pitas. Stephen was a graduate of Attleboro High School and later received a Degree in Criminal Justice. He proudly served from 1951-1954 in the United States Marine Corps obtaining the rank of Corporal. Stephen was deployed to Korea to serve in the Korean War where he bravely fought before returning stateside. Upon his honorable discharge from the Marine Corps, he began his 28 years of service in the City of Attleboro Police Department. Through his years as a police officer, he climbed the ranks from Patrolman to Sergeant and then Lieutenant. Stephen was appointed to take charge of the first official Detective Division for the City of Attleboro Police Department. In his later years, he took the position of Police Prosecutor in the Attleboro District Court. Stephen enjoyed golfing and fishing, especially on Narragansett Bay and the Cape. He was an avid deer hunter and fan of all sports from baseball, football to basketball. He treasured spending time with his loving family most of all. Stephen is survived by his two daughters, Sheryl Mongeau and her husband Paul of Attleboro and Sheree Lingard of Dighton; his two sons, James White and his wife Joyce of Attleboro and Garry Blakeley of Punta Gorda, FL; his grandchildren, Michael White and his wife Kimberly of Plainville, Michaela Hanson and her husband Mark of Rehoboth, Jennifer Lingard of Rehoboth and Tyler Lingard of San Diego, CA and Brooke Blakely; his sister, Joyce DeLutis and her husband Peter of Englewood, FL; he is also survived by several great grandchildren and many nieces and nephews. He was the brother of the late Kenneth Pitas. Relatives and friends are invited to attend a visitation from 4-7 p.m. on Friday, January 29, 2021 at the Duffy-Poule Funeral Home, 20 Peck Street, Attleboro, MA. A graveside service with military honors will be held at 10 a.m. on Saturday, January 30, 2021 at the Newell Burying Ground, 1502 West Street, Attleboro. For the safety of those who wish to pay their respects, please do so in accordance with CDC, Federal and State guidelines including social distancing and the use of face masks. In lieu of flowers, memorial donations may be made to the Disabled American Veterans, VA Regional Office, JFK Fed Bldg, Government Ctr, Boston, MA 02203 or directly at https://www.dav.org/

ATTLEBORO &#8211; Stephen Pitas Jr., 88, lifelong resident of Attleboro passed away at his home on Sunday, January 24, 2021. He was the devoted husband of the late Lorraine D. (Jones) Pitas. Born in Attleboro, MA on December 3, 1932, he was... View Obituary & Service Information

The family of Mr. Stephen Pitas Jr. created this Life Tributes page to make it easy to share your memories.

Send flowers to the Pitas family.