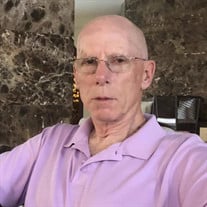 Stephen Joseph Baker of Plainville, passed away peacefully on August, 2, 2021 at 71 years of age. Beloved husband of Chizuko (Miyamoto) Baker. Son of the late Agnes Theresa (Lyons) and James Henry Baker. Loving father of Erina Baker Palmisano and her husband Christopher Palmisano of North Attleboro and Stephen Joseph Baker, Jr. and his wife Julie (Dobson) of Middleboro. Cherished grandfather of Nola and Holden Palmisano and Ashley and Brianna Baker. Adored brother of James Frances Baker of Foxboro and Susan Anne (Baker) Alves of Plainville. Stephen also leaves a multitude of longtime friends from childhood through adulthood, through the various athletic, social, military, and volunteer organizations he participated in. Stephen was born in Norwood, MA and attended St. Catherine of Sienna School as a child. He then attended Norwood High School and went on to Fitchburg State College where he obtained an Associate’s Degree in Engineering. He served in the U.S. Air Force as a Sergeant during the Vietnam Conflict between 1969-1974. He was stationed in Japan during these years and was discharged from Yokota Air Base in 1974. Stephen was employed as Sr. Software Development Engineer at Telco Systems for 21 years from 1984-2005 and also at Invensys (formerly Schneider Electric) for 9 years until his retirement in 2016. He was a Board Member of the Wampanoag Road Runners, member of the Narragansett Bay Wheelmen and 8 years President of Oak Hill Condominiums. Stephen was a congregant of St. Catherine’s Church in Norwood and later at St. Mark’s Church in Attleboro Falls. Stephen was a 7-time Boston Marathon runner and volunteered for the marathon for many years. He was a 10-year transport volunteer for the Pan-Mass Challenge and a volunteer for the Old Fashioned Ten-Miler (OFTM) Race in Foxboro. With his relentless athleticism, he participated in many Century Rides (100 miles) and the 24-plus hour relay race, Reach the Beach. Stephen enjoyed sailing, softball, volleyball, bowling, coaching his kids’ softball and baseball teams when they were young, and lending a word of guidance about cars when they became adults. He was also an avid traveler, collector of pins, hats, bicycles, and music. He loved listening and dancing to music with his life partner, Chizuko, and inspiring the joys of life with everyone he touched. Stephen is known for his kindness and quiet leadership. He was always available for a friendly chat, or an open-hearted discussion. He loved showing his friends and family how to live fully and persevere through difficulties with a positive light. Relatives and friends are invited to attend visitation on Friday, August 6, 2021 from 4-8 PM at Duffy-Poule Funeral Home, 20 Peck Street, Attleboro. The funeral will be conducted on Saturday, August 7, 2021 from the Duffy-Poule Funeral Home at 9 AM, followed by a Mass of Christian Burial at 10 AM at St. Mark’s Church, 105 Stanley St., N. Attleboro. Burial with Military Honors will proceed at St. Mary’s Cemetery, Towne St., N. Attleboro. In lieu of flowers, donations in Stephen’s name, may be made to Pan-Mass Challenge (www.pmc.org), as an inspiration stemming from his wife’s bout with cancer.

The family of Mr. Stephen J. Baker created this Life Tributes page to make it easy to share your memories.

Stephen Joseph Baker of Plainville, passed away peacefully on...

Send flowers to the Baker family.