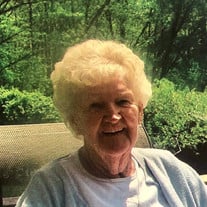 ATTLEBORO – Shirley E. Berg, 89, of Attleboro, passed away on Wednesday, November 13, 2019 in the Sturdy Memorial Hospital, Attleboro. She was the loving wife of the late John G. Berg Jr. Born on April 16, 1930 in Brighton, MA, she was a daughter of the late Philip and Christine (Cleggett) Johnson. Shirley had been a resident of Attleboro since 1980 previously living in Norton. She worked as a data entry specialist for Metals and Controls Corp, Texas Instruments and she retired from the Foxboro Company. Shirley enjoyed making rugs, knitting, ceramics and collecting antiques. Her proudest moments where those spent with her grandchildren and family. Shirley was a longtime communicant of St. John the Evangelist Church in Attleboro. She is survived by four children; Jack Berg of Mansfield, Patricia Henry and her husband Bill of Mansfield, Robert Berg and his wife Colleen of Norton and Christopher Berg of Attleboro; four grandchildren, Sean Henry of Attleboro, Erin Terpstra of Norton, Shaina Berg of Norton and Brendan Berg of Norton; great grandchildren; Taylor and Emmersyn Henry and Emmalin and Abigail Berg and Hunter Terpstra; her siblings, John Johnson of SC and Edward Johnson of Texas; also many nieces and nephews. She was the mother of the late Michael L. Berg and sister of the late Philip Johnson, Christine Wade, Barbara DelGallo, Elaine Brown and Pauline Baldy. Relatives and friends are invited to attend a visitation from 4-6 p.m. on Monday, November 18, in the Duffy-Poule Funeral Home, 20 Peck St., Attleboro. A funeral will be conducted on Tuesday, November 19 at 9 a.m., from the Duffy-Poule Funeral Home, followed by a Mass of Christian burial at 10 a.m., in St. John the Evangelist Church, 133 North Main St., Attleboro. Burial will follow in St. John’s Cemetery, Attleboro. In lieu of flowers, donations in Shirley’s name may be made to the Dana-Farber Cancer Institute PO Box 849168, Boston, MA 02284.

The family of Mrs. Shirley E. Berg created this Life Tributes page to make it easy to share your memories.

Send flowers to the Berg family.