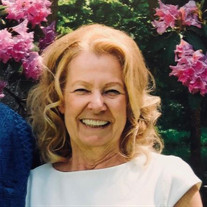 NORTH ATTLEBORO- Sheila J. McEachern, 69, of North Attleboro, passed away peacefully, on Wednesday, June 20, 2018 at her home, surrounded by her loving family. She was the dear wife to Robert McEachern of North Attleboro. Born on July 23, 1948 in Norwood, she was the beloved daughter to the late Frank and Jeanne (Peatfield) Slauzis. A resident of North Attleboro for over 30 years, Sheila previously resided in Walpole. Before Sheila began her well-deserved retirement, she ended her work career as a secretary at Graphic Images in Plainville. In her spare time, she enjoyed attending yoga classes at the local YMCA. In addition to her husband, Sheila is survived by her son, James Kentros and his wife Shea of California; her grandsons, Connor and Colin Kentros; her brothers, Ed Slauzis and his wife Peggy of Minnesota and John Slauzis and his wife Heather of California; her nieces, Mackenzie, Kathleen, and Jennifer, all of California; her sister-in-law’s, Carol Lopez and her husband Frank of Hawaii, Susan Wiener and her husband Michael of Florida, Alice Bradford and her husband Bill of Kentucky, and Mary Zakrzewski and her husband Jay of MA; her step-daughters, Juliann McEachern of New York, Katie McEachern of MA, and Allison McEachern of MA; her step-grandsons, Nicholas and Owen; and also many extended family members, friends, and former co-workers. In addition to her parents, Sheila is predeceased by her brother, Frank Slauzis. Relatives and friends are invited to attend a memorial service on Wednesday, June 27th, 2018 at 12:00 p.m. in the Duffy-Poule Funeral Home, 20 Peck Street, Attleboro

NORTH ATTLEBORO- Sheila J. McEachern, 69, of North Attleboro, passed away peacefully, on Wednesday, June 20, 2018 at her home, surrounded by her loving family. She was the dear wife to Robert McEachern of North Attleboro. Born on July 23, 1948... View Obituary & Service Information

The family of Mrs. Sheila J. McEachern created this Life Tributes page to make it easy to share your memories.

Send flowers to the McEachern family.