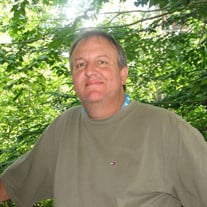 SEEKONK - Scott John Poisson, 56, of Seekonk, Massachusetts, passed away on Friday, November 13, 2020, surrounded by his family at Massachusetts General Hospital in Boston, MA. He was born to parents, John Poisson and Eileen Paquin Abboud on October 6, 1964 in Central Falls, RI. He married Stacey, the love of his life, in 2008, who survives him. Scott is also survived by beloved daughters, Savannah and Sophia Poisson. Scott will forever be remembered by his mother, Eileen; his mother-in-law, Maria Pimentel; his devoted sister, Tracie Cabral; his brother, Dean Poisson; brother-in-law’s Adelio Cabral, Derek Pimentel, and Matthew Dolansky, and sister-in-law’s Donna Dolansky, Sandy Pimentel and Jean Poisson. He will also be lovingly remembered by his nieces and nephews, Matthew Cabral and his wife Heather and their daughter, Charlotte, Timothy Cabral and his fiancé Caylin Bullock, Ryan Cabral, Kevin Cabral, Kathryn Dolansky, and Andrew Dolansky. Scott was predeceased by his father, John Poisson. Scott graduated from Tri-County High School in 1983. He started working at Willow Tree in high school and continued there until 2002. At that time, he started his own business and became a self-employed contractor. Scott loved building things from scratch and enjoyed his work. He also maintained and repaired his several apartment buildings. He was happiest when spending time with his family, saltwater fishing, building things in his workshop, and playing Sudoku. A funeral service in memory of Scott will be held on Wednesday, November 18, 2020 for immediate family members. A visitation by invitation only will be held on November 18, 2020 from 4:00 to 7:00pm at the Duffy-Poule Funeral Home, 20 Peck Street, Attleboro, MA. Burial will take place privately at a later date. The family asks that in lieu of sending flowers, donations in memory of Scott Poisson can be sent to: MGH Liver Transplant Program, ℅ Lynn Wilcott, 55 Fruit St, White 517, Boston, MA 02114.

The family of Scott John Poisson created this Life Tributes page to make it easy to share your memories.

Send flowers to the Poisson family.