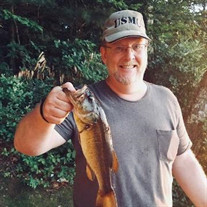 ATTLEBORO- Scott K. Candelet, 51, of Attleboro, passed away unexpectedly on the morning of Thursday, May 31, 2018, at the Sturdy Memorial Hospital in Attleboro. He was the devoted husband for 26 years, to the love of his life, Delores (Correia) Candelet of Attleboro, whom he married on September 15, 1991. Born on December 13, 1966, in Biloxi, Mississippi, Scott was the caring son to Ronald and Lynn (Paul) Candelet of North Attleboro. He grew up in Attleboro and was a 1985 graduate of Attleboro High School. Following graduation, he bravely enlisted in the United States Marine Corp. Scott served in the Marine Corp from 1987, until his honorable discharge in 1991. During his time in the service, Scott was a diesel mechanic and he also respectfully achieved the rank of Corporal while serving in Operation Desert Storm in the Gulf War. Using the skills he learned as a mechanic in the service, Scott worked in the construction industry, where he was employed as a mechanic for heavy machine equipment. Scott was a member of the Mansfield Fish and Game Club and he also took part in the original Northeast Primitive Rendezvous, which is a federal non-profit organization formed for the management of Living History Rendezvous between the time periods of 1640 - 1840. An avid outdoorsman, Scott enjoyed fishing, hunting, shooting, black powder shoots, and many other outdoor crafts. However, what he truly treasured most were the times spent with his dear family, all his friends and especially his son Kenneth, even if it was something as simple as a cup of coffee. In addition to his wife and parents, Scott is survived by his cherished children, Shana L. Candelet, Kenneth S. Candelet, both of Attleboro and Mady “Sparky” Dent, whom he loved like a daughter, also of Attleboro; his brother, Todd Candelet and his wife Sue of North Attleboro; his mother in law, Maria Correia of Attleboro; his grandmother, Charlotte Candelet; his sister-in law, Margaret Gagne and her husband Tom of Plymouth and Fatima Churchill and her husband John of Attleboro; his nieces and nephews, Megan and Ryan Gagne, Robin and Ashley Candelet, and also Abby and Samantha Churchill; he also leaves behind many loving extended family members and friends. Scott is predeceased by his grandparents, Kenneth and Lilian Paul; his grandfather, Milton Candelet; and also his father-in-law, Joaquin Correia. Relatives and friends are invited to attend a visitation on Wednesday, June 6 from 4 -7 p.m. in the Duffy-Poule Funeral Home, 20 Peck St. Attleboro. A funeral service will be held on Thursday, June 7, at 11 a.m. in the funeral home. Burial with military honors will take place privately at a later date, in the Massachusetts National Cemetery in Bourne, MA.

ATTLEBORO- Scott K. Candelet, 51, of Attleboro, passed away unexpectedly on the morning of Thursday, May 31, 2018, at the Sturdy Memorial Hospital in Attleboro. He was the devoted husband for 26 years, to the love of his life, Delores (Correia)... View Obituary & Service Information

The family of Mr. Scott K. Candelet created this Life Tributes page to make it easy to share your memories.

Send flowers to the Candelet family.