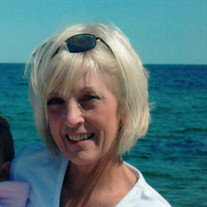 REHOBOTH - Sandra A. (Ouellet) Beauregard, 70, passed away on Wednesday, Jan. 16, 2019 at Rhode Island Hospital. She was the loving and devoted wife of Thomas Beauregard to whom she was wed for 50 years. Born in Attleboro on June 12, 1948, she was the daughter of the late Francis Ouellet and the late Marie (Beane) Ouellet. Sandy grew up and was educated in Attleboro. She graduated from Attleboro High School in 1966. She attended Chandler Secretarial School in Boston, MA after high school. Sandy worked in the eyewear industry for 25 years as a designer of fashion eyewear. Sandy was an avid horsewoman. For forty years she took loving care of her horses and rode throughout New England. Her favorite place to ride was the Rockefeller Carriage Roads in Acadia National Park on Mount Desert Island in Maine. The other place Sandy loved was her home, Cross Beau Farm, in Rehoboth, MA were she took care of her horses, gardened and enjoyed life with her husband, children and grandchildren. In addition to her husband, Sandy is survived by her son Keith and his wife Therese of Coventry, RI, her daughter Kelly and her fiancé Chris Gulla of Franklin, MA; her three sisters: Arlene Tingley of Nokesville, VA; Joan Ouellet of Newtown, CT; Gail Bechard of Lancaster, NH and two brothers: Paul Ouellet of Attleboro and Todd Ouellet of Seekonk and her four grandchildren: Ariana & Pruet Beauregard; Liam and Sophia Strange. Visiting hours will be held Wednesday, January 23, 2019 from 4 to 8 p.m. at the Duffy-Poule Funeral Home, 20 Peck Street, Attleboro, Massachusetts A funeral will be held on Thursday, January 24, at 9 a.m. in the Duffy-Poule Funeral Home, followed by Mass of Christian Burial at 10 a.m. in St. John the Evangelist Church, 133 North Main Street, Attleboro, Massachusetts. A private memorial service and interment will be held in the Massachusetts National Cemetery in Bourne, Massachusetts. In lieu of flowers, donations, in Sandy’s memory, can be made to Greenlock Therapeutic Riding Center, 59 Summer Street, Rehoboth, Massachusetts 02769.

REHOBOTH - Sandra A. (Ouellet) Beauregard, 70, passed away on Wednesday, Jan. 16, 2019 at Rhode Island Hospital. She was the loving and devoted wife of Thomas Beauregard to whom she was wed for 50 years. Born in Attleboro on June 12, 1948,... View Obituary & Service Information

The family of Mrs. Sandra A. Beauregard created this Life Tributes page to make it easy to share your memories.

Send flowers to the Beauregard family.