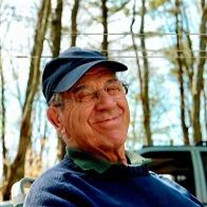 NORTH ATTLEBORO- Samuel P. Battaglia Sr., 88, of North Attleboro, passed away peacefully, surrounded by the love, comfort, and care of his devoted family on Saturday, August 25, 2018, at the Philip Hulitar Center in Providence, RI. He was the beloved husband to Eva Louise (Crosby) Battaglia of North Attleboro, whom he happily married on March 19, 1949. Born on May 5, 1930, in Watertown, MA, Samuel was the dedicated son to the late Samuel and Catherine (Sacco) Battaglia. Samuel grew up and in Watertown and graduated from Watertown High School with the Class of 1948. Shortly after graduation, he bravely enlisted in the United States Airforce. While stationed at Kessler Air Force Base in Biloxi, Mississippi from 1948 - 1949 he respectfully achieved the rank of Private First Class (PFC). Samuel served as an Air Force Reservist from 1949 until his honorable discharge in 1955. For many years, Samuel was the proud and attentive owner of Samson Oil Company in North Attleboro. During his time as owner, he built quite the reputation around town for being a great businessman and hard worker. After a long career that spanned many years, Samuel retired from his business in 1995. Following his retirement, he worked for the Holiday Inn in Mansfield, where he was a shuttle driver and also held various other positions. Samuel retired full-time from the hotel in 2008. Samuel was very active in his community, where he held many positions within municipal and religious organizations. He was a Lifetime Member of the Knights of Columbus, Treasurer of the Adamsdale Memorial Park Inc., and also a member of the Holy Name Society of St. Theresa of the Child Jesus Church. In his spare time, Samuel could often be seen listening to or heard playing music. He especially enjoyed singing along to Bing Crosby, the Boswell Sisters, the Andrews Sisters, and many other influential musicians. Samuel was also a major history buff and fed his thirst for knowledge by often tuning into the History Channel. He particularly liked learning as much as possible about military equipment and the planes of World War II. He could be regularly found puttering around in his shed and he was also a baseball fan and enjoyed watching the occasional Red Sox game. Samuel was known to often watch the local news, more specifically, the upcoming week’s weather forecast, because he knew someone would ask him about it during the day. In addition to his wife of 69 years, Samuel is survived by his cherished children, Samuel P. Battaglia Jr. and his wife Cindy of Kentucky, Francis H. Battaglia and his wife Frances of North Attleboro, Theresa L. Battaglia of North Attleboro, and Alicia A. Rusconi and her husband James of North Attleboro; his granddaughter, Jennifer LaFlamme of North Attleboro; his great-granddaughter, Samantha LaFlamme of North Attleboro; his sister, Grace Barbato of Medford, MA; many nieces, nephews, grandchildren, and great-grandchildren; and also his two faithful dogs, Pollie and Lillie Belle. In addition to his parents, Samuel is predeceased by his brothers, Joseph, Anthony, and Francis Battaglia and also his sister, Florence Crine. Samuel’s family and friends would like to graciously express thanks to North Attleboro EMS and Fire Departments, Sturdy Memorial Hospital, Life Care Center of Attleboro, Rhode Island Hospital, and Hope Hospice for all their kind and compassionate work. Lastly, Samuel’s children would like to thank their father for always smiling in his pictures. Relatives and friends are invited to attend a visitation on Friday, August 31 from 4 to 7 p.m. in the Duffy-Poule Funeral Home, 20 Peck St., Attleboro. A funeral service will be held on Saturday, September 1 at 10 a.m. in the Cushman Union Church, 2 May St., North Attleboro. Burial with military honors will follow in Mount Calvary Cemetery, Cumberland, RI. In lieu of flowers, donations in his name may be made to Hope Hospice and Palliative Care, 1085 North Main Street, Providence, RI 02904 or directly to https://www.hopehealthco.org/ways-to-give/donatenow/

NORTH ATTLEBORO- Samuel P. Battaglia Sr., 88, of North Attleboro, passed away peacefully, surrounded by the love, comfort, and care of his devoted family on Saturday, August 25, 2018, at the Philip Hulitar Center in Providence, RI. He was the... View Obituary & Service Information

The family of Mr. Samuel P. Battaglia Sr. created this Life Tributes page to make it easy to share your memories.

Send flowers to the Battaglia family.