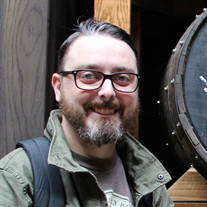 CUMBERLAND, RI – Ryan J. Quade, 36, of Cumberland, RI, passed away on Wednesday, December 30, 2020 at his home. He was the loving husband of Hannah (Nelson) Quade of Cumberland, RI. Born on October 21, 1984, he was a beloved son of James and Jodi (Wells) Quade. Ryan grew up in Waukesha, Wisconsin and was a graduate from Waukesha West High School. He then attended the University of Wisconsin- Whitewater. He moved to New England in 2010 and was currently employed as the Global Workforce Manager at MOO, Inc. since 2018. He had previously worked as a Senior Coordinator for Workforce Management at CVS Health from 2012-2018. Ryan enjoyed playing video games, watching movies, and playing with his two dogs “Nikko” & “Wickett”. He also treasured spending time with his extended family on their farm in Iowa. In addition to his wife and parents, he is survived by his two brothers, William Quade and his wife Holly and their son, Nathan James all of Center Line, Michigan and Bradley Quade and his wife Lijing Su and their daughter, Zoey Jiaxi all of Dallas, Texas; his sister, Jennifer Quade and her husband Nicholas Jorgenson and their daughter, Sumaya Luz all of Minneapolis, Minnesota; his grandparents, Rita Quade of Manson, Iowa and Jerry and Carol Wells of Webster City, Iowa; he also leaves numerous uncles, aunts and cousins in the Midwest. He was the grandson of the late Paul Quade. Ryan was born with a severe heart condition and underwent lifesaving experimental heart surgery at 2 days old. While having subsequent heart surgeries later in his childhood, he spent time in the University of Iowa Stead Family Children’s Hospital for critically ill kids. Thanks to the dedicated medical staff who cared for Ryan, he was able to share 36 wonderful years of life with his family and friends. Private funeral services will be held by the family. In lieu of flowers, donations in Ryan’s name may be made to the University of Iowa Stead Family Children’s Hospital directly at https://donate.givetoiowa.org/s/1773/foundation/interior.aspx?sid=1773&gid=2&pgid=495&cid=1222&appealcode=2021GFWA or to the Camp Odayin in Minnesota for kids with heart disease https://portal.campodayin.org/donate/guest

The family of Mr. Ryan J. Quade created this Life Tributes page to make it easy to share your memories.

Send flowers to the Quade family.