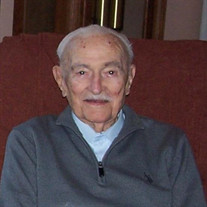 BRISTOL, RI – Rodolphe (Rudy) Emile Viens, 96, of Bristol, RI, passed away on Thursday, February 6, 2020 at the Rhode Island Veterans Home, Bristol, RI. He was the loving husband of the late Lois Mae (Boeder) Viens. Born on January 28, 1924 in Pawtucket, RI he was a son of the late Emile G. and Eva (Lamoureux) Viens. Rudy grew up in Pawtucket and attended Saint Jean the Baptist in Pawtucket, RI and Sacred Heart Academy in Central Falls, RI. He proudly served during WWII as a Sergeant in the United States Army Air Force. He served in the European Theater with operations in Africa, Italy and France. Rudy owned and operated Kustom Auto Body with his brother Ed in Pawtucket, RI. In 1957, he started as an autobody repairman at Perry & Key Auto Body in Hayward, CA, where he would quickly work his way up to shop manager, retiring in 1991. On retiring, Rudy and Lois moved to a house they designed and built in Soulsbyville, CA. They were especially proud of this home, with stone and woodwork features Rudy built himself and which was showcased in the local newspaper. In 2006, they moved to Navarre, FL, returning to Manteca, CA in 2010. Rudy was a resident of the Attleboros from 2013-2018 before moving to Bristol. Flying was Rudy’s passion, and he was a licensed aircraft owner and pilot. He also enjoyed boating around the Sacramento River delta, snowmobiling in the Sierras, golf, antique auto restoration and collecting, traveling by motorhome and camper, riding his motorcycle, and music. He is survived by his son Ronald Viens of Hayward, CA and his step-son, David Viens of Lakewood, WA. He was pre-deceased by his son Richard Viens and is survived by Richard’s children, Paul Viens of Attleboro, Joanne Delamare of Greenville, RI, Alan Viens of Attleboro and Nancy Ledoux of North Kingston, RI, and numerous great grandchildren and great great grandchildren. Rudy was the brother of the late Edouard Viens and Therese (Viens) Marquis. Funeral services will be held privately. In lieu of flowers, donations in Rudy’s name may be made to an animal welfare charity of choice, a diabetes charity of choice or a macular degeneration research organization of choice.

The family of Mr. Rodolphe Emile Viens created this Life Tributes page to make it easy to share your memories.

Send flowers to the Viens family.