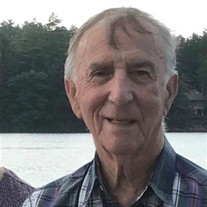 Robert J. (Bob) Reeves, 94, of Attleboro, a loving husband, father, grandfather, great-grandfather, and friend died Monday, January 29, 2018 at Sturdy Memorial Hospital after a brief illness. Born on February 8, 1923 in Roxbury to the late Helen (deBarros) Reeves and Albert H. Reeves, he was predeceased by his sister, Helen (Nellie) Reeves, and brothers, Albert H. Reeves Jr., Richard Reeves, and Edward Reeves. He was the beloved husband of the late Irene J. (Fontneau) Reeves, who died in 2009. Because of the Great Depression, Bob’s family moved many times as his father sought work to support the family. As a result of these moves, he attended schools in North Wilmington, Ballardvale, Rumford, R.I.; East Providence, R.I.; Seekonk, and Hebronville. As a boy of about 12, he worked before school at the Narragansett Race Track, walking the horses to cool them down after training. Later, he worked at the Jacob’s Hill Hunt Club in Seekonk. He attended Nathan Bishop High School in Providence as well as Attleboro High School. He left high school in 1940 to enter the Civilian Conservation Corps (CCC) in order to help his family. In the CCC he worked as a clerk typist and as a surveyor in October Mountain State Forest in Becket, Mass. Bob was a proud veteran of World War II, serving in the U.S. Army in North Africa and Italy with the 18th Replacement Battalion, attached to the Fifth Army. He received the Good Conduct Medal, the European, African, Middle Eastern Theater Campaign Ribbon and Victory Medal, as well as the military qualification of Sharpshooter. Upon returning home on Thanksgiving Day in 1945, Bob and his brother Albert (“Bud”) worked for a time manufacturing door nameplates. After a customer whose husband was a North Carolina state trooper said that her husband could benefit from wearing a namepin, the brothers eventually began a namepin manufacturing business (the first of its kind in the world) in a garage in Attleboro. The business later moved to O’Neil Boulevard and then to Newcomb Street. Reeves Company is now in its third generation of management, shipping namepins nationally and internationally. An active communicant of St. John the Evangelist Church in Attleboro, Bob served for a period of time as Director of Religious Education along with his wife, Irene. They were awarded the Marian Medal by the Diocese of Fall River for their dedicated service. Bob was a past president of the Attleboro Kiwanis Club. An enthusiastic golfer and fisherman, he was a founding member of the Fur, Feather, and Fin Club. He enjoyed fishing trips with his buddies for over 60 years. Bob often commented, “We had so much fun that it shouldn’t be legal.” More than anything else, Bob loved and delighted in his family. He is survived by his sisters, Marjorie Letourneau and Emma Reeves-Hill, as well as his dear friend, Trudy Valentine. In addition, he leaves his six children, Susan Noyes and her husband James of West Newbury, Thomas Reeves and his wife Lydia of Norton, Mary Dupuis and her husband Ron of Attleboro, Kathleen Wade and her husband Russell of South Dennis, Elizabeth Nadow and her husband Scott of Attleboro, and John Reeves and his wife Elizabeth of Byfield; 17 grandchildren, Matt, Rachel, Greg, Angie, Carlton, Marlena, Sarah, Michael, Patrick, Peter, Jessica, Lisa, Emily, Kate, Nate, Aimee, and C.J.; and 20 great-grandchildren: Logan, Phoebe, Kiara, Conner, Joel, Danny, Audrey, Ethan, Ford, Desmond, Reese, Mitchell, Zane, Reed, Evan, Abby, Wes, Alice, Ben, and DJ, with one more great-grandchild expected in June. Relatives and friends are kindly invited to attend a visitation from 5-8 p.m. on Thursday, February 1st in the Duffy-Poule Funeral Home, 20 Peck Street, Attleboro. A funeral will be held on Friday, February 2nd at 10 a.m. in the funeral home followed by a Mass of Christian Burial celebrated by the Rev. Richard Roy at 11:00 a.m. in St. John the Evangelist Church, 133 North Main Street, Attleboro. Mr. Reeves will be laid to rest in St. John’s Cemetery, West Street, Attleboro. In lieu of flowers, those wishing to remember Bob in a special way may make memorial contributions to Habitat for Humanity.

The family of Mr. Robert J. Reeves created this Life Tributes page to make it easy to share your memories.

Send flowers to the Reeves family.