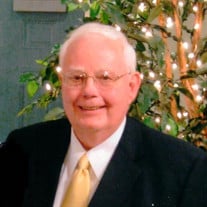 ATTLEBORO - Robert “Bob” LaCasse passed away peacefully in his sleep with family by his side on April 24, 2018. Bob was the devoted husband of Patricia (Lincoln) LaCasse, to who he was married for 60 years. Born on August 6, 1935, he was the son of Raoul and Bella (Ratte) LaCasse. Bob was a graduate of Attleboro High School, class of 1954, and earned his Bachelor’s Degree from Northeastern University. He proudly served in the United States Army and was honorably discharged in 1969 at the rank of Captain. Bob retired in 1990 from the Massachusetts General Hospital. He often said he was busier during retirement than when he was working full-time in Boston. But his retirement time was well spent, and he was happiest creating memories and spending time helping his loving and treasured family, whom were his greatest source of pride. He was a member of St. Mary’s Catholic Church in Norton, MA. In addition to his wife, Bob is survived by his three children, Cynthia Johnston and her husband Charles of Easton, Wayne LaCasse and his wife Cristy of Norton, and Barry LaCasse and his wife Michelle, of Attleboro. Bob was also the proud and adoring “Papa” to his blessed grandchildren, Carly Johnston, Hayley Johnston, Kyle Johnston, Jordan LaCasse, Evan LaCasse, Luke LaCasse and Brendan LaCasse. He is also survived by his identical twin brother, Ronald LaCasse and his wife Maureen, of Falmouth, along with their children Randall LaCasse and his wife Bonnie, and their children Stephanie and Danielle, and Robin Franks and her husband David. Relatives and friends are invited to attend a visitation on April 30, 2018 from 9:00 a.m. to 10:30 a.m. at Duffy-Poule Funeral Home, 20 Peck St., Attleboro, followed by a Mass of Christian burial, at 11:00 a.m., at St. Mary’s Church, 1 Power Street, Norton. Burial, with full Veteran’s Honors, will take place privately at a later date in St. John’s Cemetery, West Street, Attleboro. In lieu of flowers, please consider making a donation in Bob’s memory to the St. Mary’s Building Fund, c/o St. Mary’s Church, 1 Power St., Norton, MA 02766.

The family of Mr. Robert "Bob" LaCasse created this Life Tributes page to make it easy to share your memories.

ATTLEBORO - Robert “Bob” LaCasse passed away peacefully in his...

Send flowers to the LaCasse family.