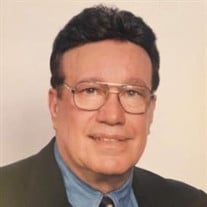 NORTH ATTLEBORO - Robert “Bob” William Hoyle, 85, of North Attleboro, passed into the arms of God on Saturday, June, 4, 2021, after a courageous battle with cancer. Born on June 5, 1935, in Providence, RI, he was a son of the late George Sr. and Ann (Miele) Hoyle. Robert was the beloved husband of Marilyn (Pistolese) Hoyle and a father to his step-children, Ronald Caponigro Jr, Laureen Angelo, Cheryl Wyman, Michael Caponigro and Andrea Downey, their spouses, 7 grandchildren and a great-granddaughter. He is also survived by his brothers, John and his wife Carol of Lincoln, RI, George Jr and his wife Carol of Cranston, RI, Harry and his wife Jan of Cranston, RI, and his nieces and nephews. The family will honor his legacy by living life to the fullest. Bob graduated from LaSalle Academy in 1953 and from Providence College in 1957. He served in the Army Reserves during the War in Vietnam, achieving the rank of Captain. He was a member of the American Legion. Before retirement, he was a Financial Manager for the Kendall Corporation and General Electric. The family expresses deep gratitude to the caregivers and staff, who provided for his care at The Branches of North Attleboro and Beacon Hospice of Fall River. Relatives and friends are invited to attend a visitation from 9-11 a.m. on Wednesday, June 9, 2021, at the Duffy-Poule Funeral Home, 20 Peck St., Attleboro, followed by a Mass of Christian Burial at St. John the Evangelist Church, 133 North Main St., Attleboro at 11:30 a.m. Burial will follow in St. John’s Cemetery, West St., Attleboro, MA. To view a livestream of Robert's Mass of Christian Burial please click on the following link: https://my.gather.app/remember/robert-hoyle

The family of Mr. Robert William Hoyle created this Life Tributes page to make it easy to share your memories.

Send flowers to the Hoyle family.