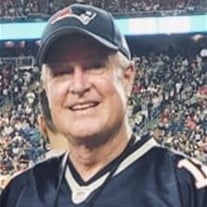 ATTLEBORO – Robert J. Greene, 70, of Attleboro, passed away unexpectedly at his home on Sunday, February 16, 2020. He was the devoted husband of Kathleen (Spillane) Greene of Attleboro. Born on April 2, 1949 in Providence, RI, he was a son of the late John and Claire (LaChance) Greene. Bob graduated from Cranston East High School and then attended the University of Rhode Island where he received his Bachelor’s Degree. He has been a resident of Attleboro for the past 43 years and worked as a software engineer for EMC for over 15 years before his retirement. Bob loved spending time at the beach, surfing in his younger days and working as a lifeguard. He was an avid New England sports fan, especially following the NE Patriots where he was a season ticket holder. Bob loved to read, swim, travel, watch movies and follow politics. He played the guitar, enjoyed listening to the “Blues” and listening to live music at the Twin River Casino and Foxwoods. Most important to Bob, was his two beagles and especially time spent with his cherished grandchildren. In addition to his wife, he is survived by his children, Heather Tisdelle and her husband Marc of East Freetown, Derek Greene of Cranston, RI and Meghan Ross and her husband Timothy of West Hartford, CT; his six grandchildren, Kaitlynn Greene, Alexander Greene, Camryn Tisdelle, Brent Tisdelle, Ian Ross and Sarah Ross; his brother, Paul Greene of Plano, TX and many nieces and nephews. He was the brother of the late John Greene IV. Relatives and friends are invited to attend a visitation on Wednesday, February 19, 2020 from 4-8 p.m. in the Duffy-Poule Funeral Home, 20 Peck Street Attleboro. A funeral service will be held on Thursday, February 20, 2020 at 10 a.m. from the Duffy-Poule Funeral Home, 20 Peck Street, Attleboro. Burial will follow at the Highland Memorial Park Cemetery, 1 Rhode Island Ave, Johnston, RI. In lieu of flowers, donations may be made to the American Heart Association, PO Box 3049, Syracuse, NY, 13220 or directly at https://donatenow.heart.org/

ATTLEBORO &#8211; Robert J. Greene, 70, of Attleboro, passed away unexpectedly at his home on Sunday, February 16, 2020. He was the devoted husband of Kathleen (Spillane) Greene of Attleboro. Born on April 2, 1949 in Providence, RI, he was... View Obituary & Service Information

The family of Mr. Robert J. Greene created this Life Tributes page to make it easy to share your memories.

Send flowers to the Greene family.