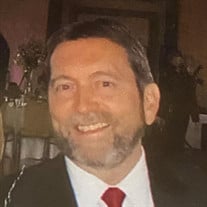 ATTLEBORO – Robert Charles Golden, 71, of Attleboro, passed away on Sunday, December 6, 2020 at his home surrounded by his loving family. He was the devoted husband to Audrey M. (Eastman) Golden of Attleboro. Born on February 17, 1949 in Boston, MA he was a son of the late John Frances and Florence Mable (Lannaville) Golden. Robert grew up in Boston and also resided in Norton for 21 years before permanently moving to Attleboro in 2005. He was employed at Raytheon, Motorola and Teradyne and then returning to Raytheon where he retired as an Electrical Cad Designer. Robert had fond memories growing up in Boston playing street hockey with his friends. He played softball in his adult years and was active in dart leagues around Norton and Attleboro for many years. He treasured boating and vacationing in Maine every summer with his family and was an avid reader. He also loved cars and attending car shows. In addition to his wife, Robert is survived by his two sons, Keith Golden and his wife, Susie of Attleboro and Andrew Golden and his wife, Katelynn of Attleboro; his brothers, Jimmy Golden and his wife Charlette of West Roxbury, Tommy Golden and his significant other Helen Lepore of West Roxbury; his sisters, Joan Elwood of West Roxbury and Kathy Cerulo and her husband Lou Cerulo of Foxboro; his grandchildren, Sophia Golden, Joshua Golden and Hazel Golden all of Attleboro, and by many nieces and nephews. He was the brother of the late Patricia Ann Golden and brother-in-law to the late Joseph Elwood. Relatives and friends are invited to attend a memorial visitation from 1-4 p.m. on Sunday, December 13, 2020 at the Duffy-Poule Funeral Home, 20 Peck Street, Attleboro, MA. In lieu of flowers, donations in Robert’s name may be sent to the American Heart Association, PO Box 3049, Syracuse, NY 13220 or to the Kidney Foundation at the following web address: https://www.kidney.org/support For the safety of those who wish to pay their respects, please do so in accordance with CDC, Federal and State guidelines including social distancing and the use of face masks.

ATTLEBORO &#8211; Robert Charles Golden, 71, of Attleboro, passed away on Sunday, December 6, 2020 at his home surrounded by his loving family. He was the devoted husband to Audrey M. (Eastman) Golden of Attleboro. Born on February 17, 1949... View Obituary & Service Information

The family of Mr. Robert Charles Golden created this Life Tributes page to make it easy to share your memories.

Send flowers to the Golden family.