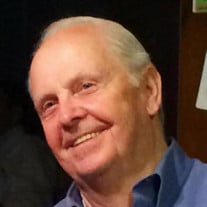 Robert J. Edwards, 80 of 36 Beagle Club Road, Attleboro, Massachusetts died suddenly on Wednesday, June 9, 2021 at Rhode Island Hospital. He was the Husband of the late Diane M. Edwards. Born in Attleboro, he was the son of the late Henry K. Edwards and the late Evelyn (Bergeron) Edwards. He resided in Attleboro for the entirety of his life. He was a graduate of Attleboro High School. Robert was a devoted employee for the Massachusetts Electric Company for 36 years, before retiring 23 years ago. Robert was a communicant of St. John the Evangelist Church, in Attleboro, Massachusetts. Robert is survived by his two sons, James M. Edwards and his partner, Lynne F. Crandall of West Boylston, Massachusetts, and Michael R. Edwards, of Attleboro, Massachusetts, two daughters, Lynn Coffey, and her husband Allan of Attleboro, Massachusetts, and Bethany Edwards and partner Adam Reid, of Plymouth, Massachusetts. In addition to his children, he is survived by his six grandchildren, Kaitlyn L. Edwards, Matthew R. Edwards, Nicholas M. Edwards and his long-time girlfriend Taylor Corey, Amanda L. Stroud, John G. Stroud, II, and Jeremiah A. Coffey, and his step-grandson, David Ellsworth. Additionally, he is survived by his sister-in-law, Bernadette Pina and her husband Richard, of Bellingham, Massachusetts, his sister-in-law, Barbara Edwards, of Norwich, Connecticut, his former sister-in-law, Kay Demaio, of Warwick, Rhode Island, along with several nieces and nephews. Robert was pre-deceased by his brothers Kenneth Edwards, and John Edwards, and his brother-in-law, Robert Almeida. Bob, as he was known by, was competitively athletic and excelled at duckpin bowling, playing pool and golfing in his later years. He never passed on a game of cribbage, poker or pitch if there was a deck of cards to be found. Bob enjoyed trips with his family to the local casinos and particularly enjoyed video poker, keno and the daily numbers. He also enjoyed caring for his lawn and flower garden making sure they thrived and grew in his care. Bob and his family enjoyed traveling but enjoyed more the simple vacations in the Lakes Region of New Hampshire or in coastal Maine. It was around campfires, game boards, card tables, horseshoe pits, ping-pong tables, pool tables and dinner tables that some of the most memorable family times were enjoyed. Bob was a man of faith and devotion both in the church and in his loving memories of a lifetime spent with his beloved wife Diane. He served as a collector at St. John the Evangelist Church for many years and collected annually for the Catholic Charities Appeal. He had a strong faith in God and led his family through his lifelong example of his humility and strength. He had a tender heart and knew no enemies. One of Bob’s greatest passions was the enjoyment that he both received and gave when in the company of his precious grandchildren. With each of them he had unique relationships, but what was clear and consistent was his love and adoration for all of them. He was a caretaker and a confidant, co-conspirator in pranks and example of virtue for his grandchildren to experience over the years. He provided a home with stability, certainty, love and acceptance for his grandchildren, even with the challenges they each met in their own lives. Bob’s devotion was not limited only to his family and faith but also to his career and passion for sports. He was recognized by his lifetime employer, Massachusetts Electric for the lengthy string of consecutive service years without time missed from work, which set the standard in his family for dependability and loyalty. Bob was an avid sports fan who loved all of the local teams, but had a special place in his heart for the Red Sox. He acquired season tickets to Fenway Park for many years and shared those precious seats with family and friends, where so many thrilling, life-long memories were forged around his beloved team. Bob was a true family man who spent most of his free time caring for others, primarily his children, grandchildren and friends. His sensitive spirit lent to his ability to find humor in silly things. Gatherings with his family and friends centered around his kind, light hearted spirit and willingness to put all others in a comfortable place. He welcomed neighbors, in-laws, loved ones of his children and strangers into his home all as though they were his own. He was a kind hearted, sentimental guy who was beyond generous to his family as well as those in great need. Bob made those around him laugh and smile without trying too hard. He was the life of all of the family gatherings and would use his subtle wit to keep everyone light on their toes. He was a good sport and didn’t take himself too seriously, which allowed him to join in the family’s crazy themed parties. He was truly a devoted family guy who loved others with all his heart. He cared for his wife, children and grandchildren as he devoted his life to making sure they all had all of what they needed. No gift given ever superseded the love and patience he offered to each and every family member, friend or neighbor. He will be sorely missed by all who had the pleasure of having known him. Relatives and friends are invited to attend visitation on Thursday, June 17, 2021 from 4-8 PM at Duffy-Poule Funeral Home, 20 Peck Street, Attleboro. The funeral will be conducted on Friday, June 18, 2021 at 9 AM from the Duffy-Poule Funeral Home, followed by a Mass of Christian Burial at 10 AM at St. John the Evangelist Church, 133 N. Main St., Attleboro. Burial will follow at St. John Cemetery, Attleboro.

Robert J. Edwards, 80 of 36 Beagle Club Road, Attleboro, Massachusetts died suddenly on Wednesday, June 9, 2021 at Rhode Island Hospital. He was the Husband of the late Diane M. Edwards. Born in Attleboro, he was the son of the late Henry... View Obituary & Service Information

The family of Mr. Robert J. Edwards created this Life Tributes page to make it easy to share your memories.

Send flowers to the Edwards family.