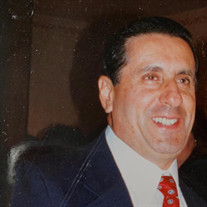 NORTH ATTLEBORO - Richard “Dick” Joseph Panico, 78, of North Attleboro, MA passed away at his home surrounded by his beloved family on Thursday, October 22, 2020. Born on November 6, 1941 in Chelsea, MA he was a son of the late Joseph and Florence (Dudley) Panico. Richard was a proud graduate, Class of ‘59, of Mission High School in Roxbury, MA and a graduate of Bentley University. He spent much of his career working as a Controller at Eastern Metal Mills in Dedham, MA. Richard proudly served in the United States Army until his honorable discharge. His true-life work was his family. He was always there when anyone needed him no matter the circumstances. His greatest joy was attending any event his grandchildren were involved in. He never missed a game if he could get there. Richard is survived by his loving and devoted wife of fifty-three years, Kathleen (Nangle) Panico of North Attleboro; his son, John Panico and wife Phyllis of Foxboro; his daughter, Jo-Ann Lapierre and partner Christopher Payson both of Plainville; his son, Richard Panico Jr. of Fairfield, CT; Richard is also survived by his grandchildren, Jake and Sam Panico both of Foxboro, C.J., Michele, and Anderson Lapierre all of Rehoboth, Stephen, Ryan and Sarah Panico all of Fairfield, CT and his sister, Jean Marie Souza of Marshfield. He was the brother of the late Donna Barsky and William Panico. Relatives and friends are invited to attend a visitation from 4:00 p.m. to 7:00 p.m. on Monday, October 26, 2020 at the Duffy-Poule Funeral Home, 20 Peck Street, Attleboro. For the safety of those who wish to pay their respects, please do so in accordance with CDC, Federal and State guidelines including social distancing and the use of face masks. A private service and burial will be held by the family.

The family of Mr. Richard Joseph Panico created this Life Tributes page to make it easy to share your memories.

Send flowers to the Panico family.