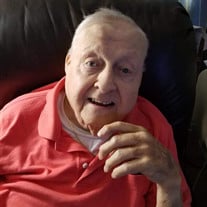 North Attleboro -Richard Allen McKearney, passed away surrounded by his loving family on June 10, 2019 at Madonna Manor in North Attleboro. He was the beloved husband of the late Betty (Brown) McKearney. Born August 5, 1934, in Attleboro, MA, he was the son of late James L. McKearney and Gladys (Johnson) McKearney. Richard grew up in Rehoboth and attended Taunton High School where he played football for the Tigers. As a young man, Richard worked on many farms in the area and worked for Atherton’s Furniture. Richard proudly enlisted in the United States Air Force in 1954. He served in the Korean War and earned a National Defense Service Medal and a Good Conduct Medal. After his honorable discharge from the Air Force in 1962 Richard worked for the Balfour Company where he apprenticed as a toolmaker. He would later work as a tool maker at Leavens Company, Guyot Brothers, Texas Instruments, Robbins Company and many more local companies. Richard coached in the Attleboro Little League at all levels, peewee to pony. He was Cub Scout and Boy Scout leader. Richard was an Attleboro Auxiliary Officer earning the rank of Sargent as well as a Bristol County Sheriff for the Attleboro courthouse. In 2004, Richard volunteered with the Attleboro Veteran’s office where he spent countless hours organizing and documenting all city Veterans’ information. He was appointed by Mayor Dumas as a member of the Board of Directors with AACS Attleboro Cable. He was bestowed with the True Santa volunteer of the year award by the Sun Chronicle. Richard was a member of VFW Post 115 and was the Post Commander from 2002-2003. He was known from that time on as the General to his fellow veterans that would stop by Attleboro Veterans office Richard was known as Pops to those who loved him the most. Richard is survived by, sons Duane McKearney of Sheldonville MA and Keith McKearney & spouse Dr. Melissa Sulin of New Ipswich NH, and, former daughter in laws, Heidi McKearney of Attleboro and Linda McKearney of New Mexico; He leaves many grandchildren, Corey McKearney & spouse Jaquilina of S. Attleboro, Jeremy McKearney of Vermont, Brenden McKearney of Attleboro, Elliot McKearney of Attleboro, Nicole McKearney of Wrentham, Adam McKearney of New Mexico and Jessica McKearney of New Mexico. Along with his great grandchildren, Jade, Cody & Marlee, and 2 more on the way! Brothers Raymond & Gary McKearney and a sister Janet Dyer. Along with many nieces and nephews. Richard was predeceased by his son, Richard McKearney Jr., his brother’s James and Ronald McKearney and his sister Gladys Benoit. Relatives and friends are invited to attend a memorial visitation on Saturday, June 22, 2019 from 9 – 11 a.m. immediately followed by a funeral service at 11 a.m. at the Duffy-Poule Funeral Home, 20 Peck Street, Attleboro. Burial with Military Honors will follow in North Purchase Cemetery, Attleboro.

North Attleboro -Richard Allen McKearney, passed away surrounded by his loving family on June 10, 2019 at Madonna Manor in North Attleboro. He was the beloved husband of the late Betty (Brown) McKearney. Born August 5, 1934, in Attleboro, MA,... View Obituary & Service Information

The family of Mr. Richard Allen McKearney created this Life Tributes page to make it easy to share your memories.

Send flowers to the McKearney family.