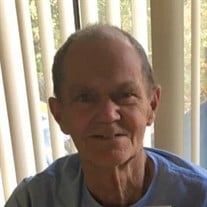 ATTELBORO - Richard George Kettle of Attleboro, MA passed away peacefully in his sleep with family by his side on Thursday, March 8, 2018. A fisherman, bird enthusiast, self-proclaimed comedian, avid boat watcher, Patriot and Red Sox fan, and good ole Country boy at heart, Richard enjoyed movies at home, games on the big screen, a good burger off the grill, and spending countless hours on his deck at his summer home in Falmouth, Mass gazing out at the lake, admiring the wildlife, and taking in all the smells and sights of a summer day as the noise of the world seemed to stop, and the quiet ripples on the lake played a summer song. A Polio survivor, Richard never let his difficulty walking stop him from doing anything. From dragging the sled in the front yard with his children when they were young up and down the hill on winter days, to climbing ladders, and scaling fences to get to his garden, Richard lived his life as if obstacles did not exist. Richard possessed such a deep admiration and respect for all branches of the military, and though his polio deemed him ineligible for service, it was always his wish to have been able to serve his country. His professional life varied throughout his lifetime. Richard was owner and operator of the mom and pop store Fourth Street Market, and later in life became a Real Estate Broker in Providence, RI, which he retired from at the age of 62. Richard graduated from Johnson and Wales and became Vice President of the Dante Jewelry Company in Attleboro where he professionally experienced great success, but no professional success could ever surpass the life changing moment of meeting the love of his life amidst these halls, his wife of 46 years, Patricia Kettle (Cadero) of Attleboro. If asked what was the greatest day of his life he would respond, “the day I met my wife for I knew the day I met her that I was going to marry her”. Their love was a storybook romance and Richard would consider his greatest achievement in life as being a family man. Richard leaves behind his adoring wife Patricia Kettle, cherished daughters Nikki and Kristi Kettle, and his beloved grandson Brady Kettle of Attleboro. He is the son of the late Howard Kettle who passed away from Polio, and Dorothy Fleury and Fred Fluery, his step-father. He was brother to the late Robert Kettle, and is survived by his brother Howard Kettle of Boston, Mass, and sisters Lois Boudreau and Elizabeth Pelletier of Coventry, RI. Relatives and friends are invited to attend a visitation on Wednesday, March 14, 2018 from 4-6 p.m. at Duffy-Poule Funeral Home, 20 Peck St., Attleboro. A service will follow at 6 pm in the Funeral Home for Richard. The family is asking in lieu of flowers that those who are able to please donate blood at your local Red Cross in Richard’s name.

ATTELBORO - Richard George Kettle of Attleboro, MA passed away peacefully in his sleep with family by his side on Thursday, March 8, 2018. A fisherman, bird enthusiast, self-proclaimed comedian, avid boat watcher, Patriot and Red Sox fan, and... View Obituary & Service Information

The family of Mr. Richard George Kettle created this Life Tributes page to make it easy to share your memories.

Send flowers to the Kettle family.