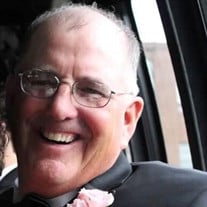 ATTLEBORO- Richard Terry Grinnell, 70, of Attleboro, passed away unexpectedly, but peacefully, in the arms of his wife the morning of Sunday, September 23, 2018 at home. He was the beloved husband and best friend for 47 wonderful years to Joanne Marie Grinnell (Caponigro) of Attleboro, whom he married on April 24, 1971. Born on May 30, 1948 in Hudson, Michigan, Terry was the dear son of the late Charles and Margaret (Bevelhymer) Grinnell. Terry grew up and spent his younger years in Clinton, Michigan and was a 1966 high school graduate from Clinton High School. Following graduation, at the height of the Vietnam War, Terry bravely enlisted in the United States Navy. Terry proudly served in the Navy from 1967-1971. During his time in the service he worked as an Aviation Structural Mechanic, while respectfully achieving the rank of Petty Officer Second Class. Terry was deservedly rewarded with many decorations and medals for his service flying combat missions with the U.S. Navy Seawolves. He was the proud recipient of the Vietnam Service Medal, National Defense Service Medal, Vietnam Campaign Medal with Device, Navy Commendation Medal with Combat V, and 16 Air Medals. Putting his mechanical skills from his time in the military to use, Terry spent much of the early 1970’s working for A. Caponigro & Company. In 1976, he became co-owner and operator of J & T Excavating located in Attleboro. During his many years serving the Attleboro area, Terry built the reputation for being a great business owner and providing quality work to many clients. In his spare time, Terry was an avid outdoorsman. He spent a lot of time in the mountains of New Hampshire, where he enjoyed his home, going fishing, riding snow mobiles, and boating. He also liked watching NASCAR and drag racing “The Lonicutter”. Being a devout family man, Terry truly appreciated every moment he spent in the presence of his treasured family. He especially cherished spending time with them at his cabin in New Hampshire and frequently attending his grandson’s hockey and soccer games. In addition to his wife, Terry is survived by his dedicated sons, Corey Michael Grinnell and his wife Crystal of Salem, OR, Timothy Daniel Grinnell and his wife Kelly Jean of Attleboro, and Daniel Terry Grinnell and his wife Kelly Sue of East Providence, RI; his adoring grandsons, Timothy John Grinnell and Tyler Daniel Grinnell of Attleboro and Gunnar Terry Grinnell and Grady Daniel Grinnell of East Providence, RI; his siblings, Michael Grinnell of Clinton, MI, David Grinnell of Cheboygan, MI, Madeline Welch of Clinton, MI, Melodie Roberts of Tecumpseh, MI, and Jeffrey Grinnell of Cadillac, MI; and also countless nieces, nephews, cousins, and dear friends. In addition to his parents, Terry is predeceased by his brother, Lynn Grinnell. Relatives and friends are invited to attend a visitation on Thursday, September 27, from 4-8 p.m. in the Duffy-Poule Funeral Home, 20 Peck St. Attleboro. A funeral service, with military honors will be held on Friday, September 28, at 10:30 a.m. in the funeral home. In lieu of flowers, donations in Terry’s memory may be made to the Wounded Warrior Project: PO Box 758517, Topeka, Kansas 66675 or directly to the following web address: https://support.woundedwarriorproject.org/default.aspx?tsid=10043

ATTLEBORO- Richard Terry Grinnell, 70, of Attleboro, passed away unexpectedly, but peacefully, in the arms of his wife the morning of Sunday, September 23, 2018 at home. He was the beloved husband and best friend for 47 wonderful years to Joanne... View Obituary & Service Information

The family of Mr. Richard Terry Grinnell created this Life Tributes page to make it easy to share your memories.

Send flowers to the Grinnell family.