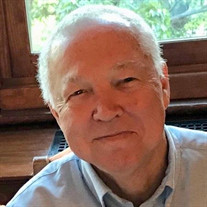 Raymond W. Scanlon, age 69, of Attleboro died on Monday, August 12th, at Beth Israel Deaconess Medical Center in Boston. He was the beloved husband of Cheryl Brooks. Born in Worcester, he was the son of Walter C. Scanlon and the late Barbara (Aldrich) Scanlon. Ray was valedictorian of the North Attleboro High School Class of 1968. He earned a B.S. in mathematics, with minors in English and French, from Worcester Polytechnic Institute and went on to work as an assembly language programmer and software developer. His career included employment at the Foxboro Company, Codex/Motorola, Data General and EMC. Ray was a member of Collective Marks Artists’ Collaborative and the Attleboro Arts Museum and a former member of the Attleboro Cultural Council. He was a railroad enthusiast, a competent genealogist, and a cruciverbalist, particularly relishing British-style cryptic crosswords. A keen observer of nature, he experimented with digital photography, using his bit manipulation and pattern detection skills to make digital photographs of objects from nature as well as industrial ephemera. His work has appeared at the Attleboro Arts Museum and at local galleries. A consummate wordsmith, he wrote short non-fiction (with a wry sense of humor and the occasional exaggeration) and had more than 75 pieces published. A befitting (unpublished) example: "To the Writer of My Obituary 18 May 2013 I won’t have passed away. I won’t have gone to my Lord. I will have died. On pain of my ghostly vengeance, my obit may not contain the word avid. Though it’ll probably be public record, the cause of my death is nobody’s g*******d business; my friends will already know. Come to think of it, I’ve done nothing a million of my betters haven’t, so unless newspapers stop charging for publishing obituaries, don’t bother." Ray’s devotion to his grandchildren was the most important thing in his life. He was unfailingly courteous and gentlemanly, always giving his full attention to those around him. He was known for his uncomplaining cheerfulness and love of life, despite the increasing adverse effects of a lifelong disease. He accepted life on life’s terms, and he will be remembered by all who knew and loved him as an uncommonly good and decent man. In addition to his wife, Ray leaves his father, Walter C. Scanlon of Falmouth; his brother, David Scanlon and his wife, Elizabeth, of Rehoboth; his sister, Kathryn Scanlon Catanach and her husband, Rodney, of Falmouth; his step-daughter, Tracy Chandley of Seekonk; his grandson, Cpl. Jordan Kraatz, USMC, and his wife, Melinita, of Oceanside, CA; his twin granddaughters, Hunter Kraatz and Alison Kraatz of Rehoboth; his great-granddaughter, Mia Rose Kraatz of Oceanside, CA; his nieces and nephews Briana Chace, Michael Scanlon, Matthew Scanlon and his wife Jessica, Laura Catanach, Tamara Catanach; his grand-nephews Tommy and Charlie Scanlon; and a close circle of friends, including beloved lifelong friends Jean and Bill Thompson. Relatives and friends are invited to attend a memorial visitation from 4-6 p.m. on Thursday, August 22, 2019 in the Duffy-Poule Funeral Home, 20 Peck Street, Attleboro. A memorial service will immediately follow at 6 p.m. in the funeral home. In lieu of flowers, please send donations in memory of Ray to: Joslin Diabetes Center, 1 Joslin Place, Suite 745, Boston MA 02215 or directly at joslin.org.donate

Raymond W. Scanlon, age 69, of Attleboro died on Monday, August 12th, at Beth Israel Deaconess Medical Center in Boston. He was the beloved husband of Cheryl Brooks. Born in Worcester, he was the son of Walter C. Scanlon and the late Barbara... View Obituary & Service Information

The family of Raymond W. Scanlon created this Life Tributes page to make it easy to share your memories.

Send flowers to the Scanlon family.