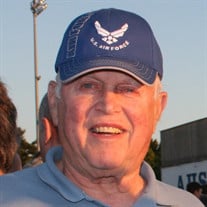 Ralph E. Smith, 84, of Attleboro, MA, passed away Monday, May 20, 2019. Born on August 21, 1934, in Attleboro, MA, he was the oldest of four children born to Ralph and Helen (Whitcomb) Smith. At age 15, Ralph moved to Bridport, VT where he met his sweetheart Tess. While attending Middlebury High School, he was a three-sport athlete lettering in football, basketball, and baseball all three years, graduating in 1953. Following high school, Ralph served four years in the U.S. Air Force stationed at Westover Air Force Base. Ralph earned the rank of Staff Sergeant training pilots and operating the decompression chamber. While serving, Ralph and Tess married, December 1, 1956, in Danbury CT then resided in Springfield MA. In 1959, Ralph moved his family back to Attleboro to work with his father as a mechanic at Smith’s Texaco in Seekonk MA. Ralph would eventually take over the family business. Retiring from the business several years later, he worked multiple jobs to keep busy officially retiring at the age of 82. During his life, Ralph remained involved in many sports as a member of softball and basketball teams, coaching youth baseball, and a fan of his six grandchildren’s many teams. In his later years, he enjoyed watching NASCAR, the Red Sox, and daily drives around town in his beloved blue truck. He is survived by his adoring children, Vicky Stoops and her husband Bob, Julie Whittingham, Nancy Severance, and Ralph Smith Jr. and his grandchildren Hannah, Zack, Ben, Matt, Alexis, and Mitch. Ralph is also survived by his siblings, Roberta Frazier, Norma Acker, and Richard Smith. Relatives and friends are invited to attend a memorial visitation from 6 – 8 p.m. on Tuesday, May 28, 2019, at the Duffy-Poule Funeral Home, 20 Peck Street, Attleboro. Burial will take place privately at St. Stephen’s Cemetery, Attleboro. In lieu of flowers, donations may be made to City of Attleboro Veterans Donations Fund, 77 Park Street, Attleboro, MA 02703. Please include “In Memory of Ralph Smith” on the check memo line.

The family of Mr. Ralph E. Smith created this Life Tributes page to make it easy to share your memories.

Send flowers to the Smith family.