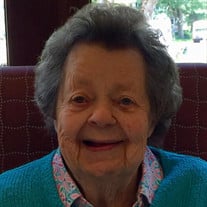 WEST DENNIS - Phyllis Hodge Lee, 94, of Wrinkle Point, West Dennis, MA passed away on July 19, 2018 surrounded by her loving family following a brief illness. She was predeceased by her husband, James “Shorty” Lee, who passed away on April 12, 2017. Born July 11, 1924 in Attleboro, she was the third of three girls born to William and Emma (Godfrey) Hodge. Phyllis attended Attleboro public schools and graduated from Attleboro High School in 1942. Following graduation she worked at several local companies, including Siselcraft and Metals and Controls as a Switchboard operator. She and Jim were married at St. John the Evangelist Church on June 17, 1950. She “retired” when she found out she was expecting their first child and subsequently became the most sought after parental volunteer, Brownie/Girl Scout Leader and later, substitute teacher at Farmers School, the three grade school located in their Mortgage Hill Neighborhood. She continued to donate her time after her children moved on from Farmers, working as a volunteer at Sturdy Memorial Hospital, primarily in the Emergency Room, for over 20 years. She then became Gramma Extraordinaire spending time with her seven grandchildren and quickly adopted the motto “if I knew grandchildren were this much fun, I would have had them first!” She was the unwavering foundation for her family, who she cherished and always put first. Phyllis was a communicant of St. John the Evangelist in Attleboro and St. Pius X in South Yarmouth. She was an avid golfer, bowler and enjoyed years of Bridge Club with her treasured friends. Phyllis and her husband were long time members of Highland Country Club and she also participated in the Wrinkle Point Summer Women’s Golf League, accumulating a significant number of trophies. She had an amazing wit and often contributed commentary to her husband’s story telling. She was the family “fact checker”. Phyllis is survived by her devoted daughters; Nancy Lee Monroe (Mark) of Attleboro, Debra Lee Mark (Glenn) of North Attleboro and Judy Lee Veilleux (Henry) of Bedford, NH and her seven treasured grandchildren: Michaela Lee Monroe, Erika Lauren Mark, Brendan James Monroe, Jeffrey Lewis Mark, Lindsay Elizabeth Veilleux, Brett Alexander Veilleux and Julia Lee Mark. She was predeceased by her sisters: Louise (Hodge) Carpenter of Cocoa Beach, FL and Willette Hodge of Attleboro. Phyllis also leaves many cherished nieces, nephews, grandnieces and grandnephews. A celebration of her 94 years of life will be held Thursday, July 26th at 10 a.m. from the Duffy-Poule Funeral Home, 20 Peck St., Attleboro, followed by a Mass of Christian Burial at 11 a.m. in St. John the Evangelist Church, 133 North Main St., Attleboro. Burial will be private. Visiting hours will be held Wednesday, July 25th from 4 to 8 p.m. in the Duffy-Poule Funeral Home. In lieu of Flowers, donations may be made to the James and Phyllis Lee Attleboro Area Football Hall of Fame Scholarship Fund. Checks payable to the Attleboro Scholarship Foundation with James & Phyllis Lee Scholarship Fund on the Memo Line can be sent to the Attleboro Scholarship Foundation 89 North Main Street, PO Box 1666, Attleboro, MA 02703.

WEST DENNIS - Phyllis Hodge Lee, 94, of Wrinkle Point, West Dennis, MA passed away on July 19, 2018 surrounded by her loving family following a brief illness. She was predeceased by her husband, James &#8220;Shorty&#8221; Lee, who passed away... View Obituary & Service Information

The family of Mrs. Phyllis Hodge Lee created this Life Tributes page to make it easy to share your memories.

Send flowers to the Lee family.