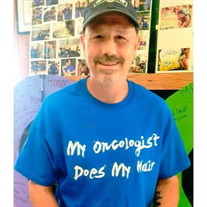 REHOBOTH- Peter C. Otto, 54, of Rehoboth and formerly of Attleboro, passed away on Monday, July 31, 2017 at his home, surrounded by his loving family. He was the loving husband of Lisa M. (Casavant) Otto of Rehoboth. Born on November 26, 1962 in Attleboro, he was the devoted son to the late Carl and Pauline (Dailey) Otto. Peter grew up in Attleboro and graduated from Attleboro High School, Class of 1980. For over 30 years, Peter was employed as Federal Express courier. Peter was a supporter of the Pan Mass Challenge for the past 9 years, taking part in 6 challenges in which he pedaled in the 192 mile ride. He belonged to several bowling teams since childhood and he also played in a co-ed softball league for many years. He was an avid golfer and hiker, especially enjoying hiking in the Grand Canyon. He had a knack for carpentry and he used that talent to build many things. Peter had a special place in his heart for animals, especially his dogs, Nikita and Brewski, and his pig, Maxwell. He will be remembered fondly for being a prankster and his comedic sense of humor. Above all, he relished spending time and making memories with his wife and two daughters. In addition to his parents and wife, Peter is survived by his cherished children, Jessica D. and Megan J. Otto, both of Rehoboth; his siblings, Carlene Ferris and her husband Roger, David Otto and his wife Lyn-Su, Sue LeFrancois and her husband Ray, and Glenn Otto and his wife Bonnie; also several nieces and nephews. Peter’s family and friends would like to graciously express thanks to the entire team at Dana Farber Cancer Institute for giving them the gift of more years with him. Without them, they would not have these memories. They would also like to acknowledge Compassionate Care Hospice for taking such good care of him and making his last few weeks so comfortable. Relatives and friends are invited to attend a visitation on Monday, August 7, 2017 from 4 to 8 p.m. in the Duffy-Poule Funeral Home, 20 Peck St., Attleboro. A funeral will be conducted on Tuesday, August 8, 2017 at 9 a.m. from the Duffy-Poule Funeral Home, followed by a Mass of Christian Burial, at 10 a.m., in St. John the Evangelist Church, 133 North Main St., Attleboro. Burial will be held privately at a later date. In lieu of flowers, donations may be made to Pan-Mass Challenge, PO Box 415590, Boston, MA 02241-5590

REHOBOTH- Peter C. Otto, 54, of Rehoboth and formerly of Attleboro, passed away on Monday, July 31, 2017 at his home, surrounded by his loving family. He was the loving husband of Lisa M. (Casavant) Otto of Rehoboth. Born on November 26, 1962... View Obituary & Service Information

The family of Mr. Peter C. Otto created this Life Tributes page to make it easy to share your memories.

REHOBOTH- Peter C. Otto, 54, of Rehoboth and formerly of Attleboro,...

Send flowers to the Otto family.