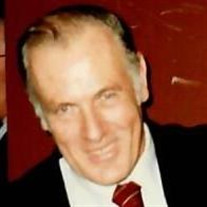 ATTLEBORO - Perry Alden Denham was born on September 9, 1927 in Attleboro, the city that was woven into the fabric of his entire life. He passed in that same city on Saturday, October 13, 2018, with his family by his side. Over the course of his 91 years, Perry served as an employee Mantrose Hauser, where he made paints and shellacks—a prelude to his zeal for canvas painting later in life. Perry also worked delivering oil to homes across the Attleboro area, and, with his free time, cultivated a vegetable garden in his backyard. Having served the U.S. Navy during the Korean War on the destroyer escort USS Strickland, Perry received the Good Conduct Medal of National Defense. At the end of his service, Perry maintained his naval ties, becoming a member of the Tin Can Sailors and acting as commander of the AmVets Post #11 in Cumberland, RI. Perry was also an avid historian, extensively researching topics such as his family lineage and Attleboro’s history. Among his crowning achievements, Perry located a rare photograph of the World War II marine cargo ship SS Attleboro, which now hangs in City Hall where it is accessible to the Attleboro public. Perry’s dedication to the people of Attleboro was further demonstrated by the 36 years he spent as a bus driver for Attleboro Public Schools. Of those years, Perry most fondly recalled those in which he drove handicapped children to school, an experience which led him to become a member of Attleboro’s Council on Handicap Affairs. Perry contentedly lived his last years at Life Care of Attleboro, where he spent his days watching the birds, reading the Sun Chronicle and the Providence Journal, watching the Price is Right and enjoying live musical performances. Throughout his life, Perry remained a devout Boston sports fan and emphasized a patriotic love of country. He strongly advocated that all U.S. citizens should utilize their voting rights, and proudly vowed that he would always use his in a document entitled “The Denham Promise”. Perry lived a long life and enjoyed long talks, much like this obituary. He will be remembered for his crystal blue eyes, his love of country, the U.S. Navy, the city of Attleboro, and his family. He is survived by his devoted daughter, Cheryl Denham McNeil of Wrentham, her husband Rob, and his daughter-in-law Mary Denham of Seekonk. He also leaves behind four cherished grandchildren: Rachel Denham of Atlanta, Georgia; Katie Wibberg of Woonsocket, RI; and Megan and Hannah McNeil of Wrentham, MA; also several nieces and nephews. His family would like to thank the incredible staff of Life Care and the Sturdy Memorial Hospital ICU, who were devoted to Perry’s happiness, comfort, and health. Perry is predeceased by his parents Myrtle Shaw and Charles Denham and by his brothers and sisters Etta Goff; Charles U. Denham, Jr.; Betty Irma Whitaker; Hazel Souto; and Robert Denham, Sr.; and by Betty Jane Denham, his wife of 68 years, and his beloved son Bruce Denham. Relatives and friends are invited to attend a visitation on Thursday, October 18, 2018, from 4 -7 pm in the Duffy-Poule Funeral Home, 20 Peck St. Attleboro. A funeral service will be held on Friday, October 19, 2018, at 10 a.m. in the funeral home. Burial with military honors will follow in Newell Burying Ground, West Street, Attleboro.

ATTLEBORO - Perry Alden Denham was born on September 9, 1927 in Attleboro, the city that was woven into the fabric of his entire life. He passed in that same city on Saturday, October 13, 2018, with his family by his side. Over the course of... View Obituary & Service Information

The family of Mr. Perry Alden Denham created this Life Tributes page to make it easy to share your memories.

Send flowers to the Denham family.