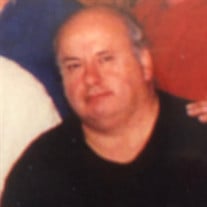 Paul R. Proulx, died unexpectedly and peacefully at his lifelong residence, 65 Ingraham St, Attleboro, MA, at the age of 71. Paul is survived by his brother Robert Proulx, and his wife Kathie; his brother Norman Proulx, and his wife Constance; his sister Carol Lima, and her husband Joseph; his sister Christine Badejo, and her husband David; and his sister, Eleanor Vassar. He is predeceased by his sister Irene Lapointe, and her husband Gilbert; and his sister Patricia Dugas, and her husband Chester. He also leaves behind many nieces and nephews. Paul was born on June 29, 1948 to Eugene Proulx and Josephine Lefleur Proulx. After graduating from Attleboro High School, Paul was drafted by the United States Army. He was a decorated and proud Combat Veteran and Medic during the Vietnam War, and a recipient of the Purple Heart. Paul rarely spoke of his time in Vietnam, but has been an avid and lifelong supporter of his fellow veterans, and agencies such as The American Legion, Veterans of Foreign Wars, The Wounded Warrior Project, and most recently donated generously to Vietnam Memorial, The Moving Wall. When Paul returned from his service in Vietnam, he began his career as a very talented screw machine operator and set up man for Automatic Machine Products. Paul was a valued employee and well regarded coworker for over 40 years. In addition, he was very supportive and generous to so many others, from a local cancer patient in need, to reaching out to send aid and comfort to survivors of the devastating wild fires in Paradise, CA. Paul will be remembered as a kind man and a devout Catholic, always quick to lend a hand or share his love of the Red Sox, Boston Bruins, and New England Patriots. He will be missed by many friends, coworkers and neighborhood shops. Paul was deeply loved by a large family. He provided endless hours of care and comfort to his deceased family members in the time before they passed away. His brothers, Robert and Norman will miss his company and shared love of sports. His sister Christine will surely miss his presence when attending weekly Mass. His sister Eleanor will miss his regular calls, checking in on her in Maine. His sister Carol will greatly miss Paul’s faithful Sunday morning visits, bringing scratch tickets and Dunkin Donuts coffee. Relatives and friends are invited to attend a visitation from 8:30-10:30 am on Tuesday, December 10, 2019 at Duffy-Poule Funeral Home, 20 Peck St, Attleboro. A Mass of Christian Burial will follow at St Vincent de Paul Church at 11:00 a.m. After the Mass, all are invited to a celebration of his life and lunch at the South Attleboro American Legion Post #312, 437 Newport Ave, Attleboro, MA. In lieu of flowers, donations in Paul’s memory may be made to The WoundedWarriorsProject.Org, or a charity of your choice.

The family of Mr. Paul R. Proulx created this Life Tributes page to make it easy to share your memories.

Paul R. Proulx, died unexpectedly and peacefully at his lifelong...

Send flowers to the Proulx family.