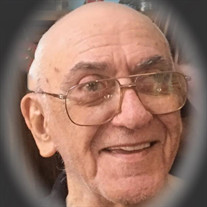 ATTLEBORO- Paul M. Peloquin Sr., 82, of Attleboro, passed away peacefully at Life Care Center in Attleboro, on Sunday, April 15, 2018, after succumbing to cancer, after a short illness. He was the devoted husband to Pauline (Godin) Peloquin, whom he shared 60 wonderful years of marriage with. He was born on April 23, 1935, in Woonsocket, Rhode Island. Paul was the caring son to the late Ludovic J. and Ida R. (LeClair) Peloquin. Paul was a proud veteran of both the U.S. Navy and the U.S. Army, serving during the Korean War and later serving in the Massachusetts Army National Guard. For many years, Paul was employed in the paper manufacturing industry, working as a Slitter for many years. Paul spent his years of employment working at the Fortifiber Plant in Attleboro and also at L & CP in Newton. In addition to his dear wife, Paul is survived by his three cherished children, Paul Peloquin Jr. and his wife Karen (Nelson) of Taunton, Barbara Bonin and her husband Timothy of Attleboro, and Mark Peloquin of Chicago, IL; his blessed 7 grandchildren and 12 great-grandchildren; his sister, Marguerite (Peloquin) Suffoletto of Wakefield, R.I.; and also many nieces and nephews. In addition to his parents, Paul is predeceased by his siblings, Reginald Peloquin and Leona (Peloquin) Thivierge. Relatives and friends are invited to attend a visitation on Sunday, April 22, 2018, from 2 to 6 p.m. in the Duffy-Poule Funeral Home, 20 Peck St., Attleboro. A funeral will be conducted on Monday, April 23, 2018, at 9 a.m. from the Duffy-Poule Funeral Home, followed by a Mass of Christian Burial, at 10 a.m., in St. John the Evangelist Church, 133 North Main St., Attleboro. Burial will follow in St. John’s Cemetery, West Street, Attleboro. In lieu of flowers, please consider making a donation in Paul’s memory to Attleboro Elks Veterans Fund, 887 South Main Street, Attleboro, MA 02703.

ATTLEBORO- Paul M. Peloquin Sr., 82, of Attleboro, passed away peacefully at Life Care Center in Attleboro, on Sunday, April 15, 2018, after succumbing to cancer, after a short illness. He was the devoted husband to Pauline (Godin) Peloquin,... View Obituary & Service Information

The family of Mr. Paul M. Peloquin Sr. created this Life Tributes page to make it easy to share your memories.

Send flowers to the Peloquin family.