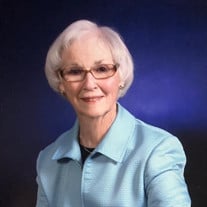 New Orleans, LA- Patricia Irene (Ballou) Staudinger, 92, passed away peacefully on February 3, 2020 at Vista Shores Assisted Living in New Orleans, LA. She was the beloved wife of the late Leonard Singleton Staudinger, M.D., who was a general surgeon, serving on the Woonsocket Hospital and Fogarty Memorial Hospital medical staffs, and had been the Chief of Surgery for 11 terms. They were married 50 years until his passing in 2002. Patricia was born on June 3, 1927 in Blackstone, MA to the late William and Mary (Clark) Ballou. She was a graduate of Blackstone High School and received a Bachelor’s Degree from Emmanuel College, in Boston. Patricia remained a proud Alumna from Emmanuel her entire life. She worked as a grammar school teacher in Blackstone until her marriage to Leonard and her role as a mother to six children became her cherished priority. Patricia was a member of St. Paul’s Church in Blackstone, MA, St. Charles Borromeo, Woonsocket, RI, St. Francis, Wakefield, RI and St. John the Evangelist, Attleboro, MA. She was a member of the Point Judith Country Club in Narragansett, and the Dunes Club in Narragansett. She enjoyed golfing, bridge and spending precious time with her family which was her greatest devotion. Patricia is survived by her children, Kathleen M. Staudinger, M.D. and husband Joseph J. Campbell, M.D. of Naples, FL; Jane E. Wallbridge and husband Ted of Toronto, Canada; Edward B. Staudinger, M.D. and wife Mary of Metairie, LA; Evelyn R. Staudinger, Ph.D. of Attleboro; Kevin C. Staudinger, M.D. and wife Maura J. Kennedy, M.D. of Birmingham, AL and David P. Staudinger and wife Holly Malkasian Staudinger of Rye, NY. Her grandchildren; Cara Staudinger Ogg and husband Thomas of New Orleans, LA; Robin Staudinger, M.D. and husband Matt Williamson of New Orleans, LA; Katherine Staudinger and Christopher Staudinger both of New Orleans, LA; Elizabeth Staudinger of Nashville, TN; Paul Staudinger of NYC and Will Staudinger of Rye, NY. Great-grandchildren Quinn Ogg, Thompson Ogg, Mclain Ogg, Carter Williamson and Cecilia Williamson all of New Orleans, LA. She is survived by many nieces and nephews. In addition to her husband, Patricia was predeceased by her siblings; sisters, Mildred Ballou Connors, Louise Ballou Kelley, brothers, Donald Ballou, Edward Ballou, Arthur Ballou and William Ballou. Patricia will be remembered as a beautiful and loving Wife, Mother, Grandmother, Great-Grandmother and friend. Her faith was profound and remained central to her throughout her long life. She enjoyed the camaraderie of her many friends over the years whose lives she always touched. The family would like to thank all her caregivers at Vista Shores Assisted Living in New Orleans. The kindness and care given by Ludy, Diane, Toya, Keisha, Tasha, Zoe and all the other staff were superb. Relatives and friends are invited to attend a Mass of Christian Burial at 11:30 a.m. at St. Charles Borromeo Catholic Church, 8 Daniels Street, Woonsocket, RI on Saturday, Feb. 15. Burial will follow in the St. Paul’s Cemetery, Blackstone, MA. Visitation will be held privately. In lieu of flowers, donations may be made to Emmanuel College, Office of Development & Alumni Relations, 400 Fenway, Boston, MA 02115 or to De La Salle Christian Brothers Center, 635 Ocean Road, Narragansett, RI 02882 or to a charity of your choice.

The family of Mrs. Patricia Irene Staudinger created this Life Tributes page to make it easy to share your memories.

Send flowers to the Staudinger family.