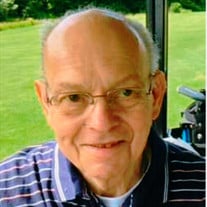 ATTLEBORO - Normand P. Pelletier, 79 of Attleboro passed away peacefully at home on May 4, 2018 surrounded by his loving family. Normand was born in Attleboro on August 17, 1938 a son of the late Adelard and Grace (Fontneau) Pelletier. Normand attended St. Joseph’s School and graduated from Attleboro High School in 1956. He served for many years on the Attleboro Vocational HS advisory board. Normand served in the US Coast Guard reserves and was stationed on the USS Yakutat for active duty in Cuba and patrolled Newport Harbor to provide security for President Eisenhower’s summer residence in Newport, RI. Normand was the owner and president of Pelletier’s Automotive Inc. and Brownell Industrial Supply, both located in Attleboro. He was the third-generation owner of Pelletier’s Automotive and slowly expanded the small repair garage and parts store into a multi-faceted automotive company which supplied area mechanics and auto body shops with automotive repair parts and paint, and also maintained an automotive machine shop including engine rebuilding. He was actively involved in the Automotive Parts industry and was a past president of AWANE (Automotive Wholesalers Association of New England). He was a longtime communicant of St. John’s the Evangelist Church in Attleboro As an avid model railroad enthusiast, he spent many hours with his children and grandchildren constructing and running a large, detailed O gauge layout. The electrical design he created allowed several model trains to race along the tracks simultaneously to the thrill of all. He shared his electrical expertise and passion for model railroading by helping design and build train layouts for other railroad hobbyist. Over the last few years, Normand actively attended Rock Steady Boxing at Parkinson’s Place in Pawtucket, RI. He participated in a 5-year Parkinson’s study with the Michael J Fox foundation and was a member of the Attleboro Parkinson’s support group. Loving husband, father and grandfather; he is survived by his wife Jean Pelletier (Carney) and their children: Deborah Pelletier of West Springfield; Daniel Pelletier and his wife Paula of Westerly RI; Donna Packer (Pelletier) and her husband Eric of North Attleboro. He was blessed with seven wonderful grandchildren; James Pelletier of Cambridge, MA, Teresa Pelletier of Manhattan, NY, Emily Pelletier of Los Gatos, CA; Julia Packer, Joel Packer, Jenna Packer and Justin Packer of North Attleboro. Also survived by; sister-in-law Judith Pelletier (Carney) of Riverside, RI, brother-in-law James Carney of Shrewsbury, MA and brother-in-law William Poirier of Laconia NH, along with many beloved nieces and nephews and grand nieces and nephews. Normand is pre-deceased by his son David Pelletier and his two sisters, Florence Burch of NY and Annette Poirier of NH. Relatives and friends are invited to attend a visitation on Friday, May 11, 2018, from 9 to 10:30 a.m. in the Duffy-Poule Funeral Home, 20 Peck St., Attleboro followed by a Mass of Christian Burial, at 11 a.m., in St. John the Evangelist Church, 133 North Main St., Attleboro. Burial will take place at a later date. In lieu of flowers, donations may be made to the CVNA of Attleboro Hospice Care, 10 Emory Street, Attleboro, MA 02703 or the Parkinson’s Place - Rock Steady Boxing, 65 Blackstone Ave, Pawtucket, RI. 02860.

ATTLEBORO - Normand P. Pelletier, 79 of Attleboro passed away peacefully at home on May 4, 2018 surrounded by his loving family. Normand was born in Attleboro on August 17, 1938 a son of the late Adelard and Grace (Fontneau) Pelletier. Normand... View Obituary & Service Information

The family of Mr. Normand P. Pelletier created this Life Tributes page to make it easy to share your memories.

Send flowers to the Pelletier family.