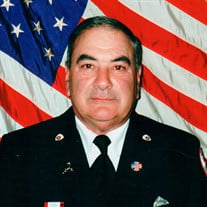 SOUTH ATTLEBORO- Norman R. Slater, 73, of South Attleboro, MA and a former longtime resident of Seekonk, MA, passed away surrounded by the love, comfort, and care of his family on Monday, July 22, 2019 at the HopeHealth Hulitar Hospice Center in Providence, RI. He was the devoted and loving husband for nearly 50 wonderful years to the true love of his life, Anne (Crocker) Slater of South Attleboro, MA. Born on July 20, 1946 in Pawtucket, RI, Norman was one of five children born to the late Ralph and Marie (Ayotte) Slater. He was raised and grew up in Cumberland, RI. Norman joined the United States Air Force after graduating Cumberland High School in the Class of 1964. He served four years during the Vietnam Era as a Fire Protection Specialist Second Class. He was stationed in many locations, but his final station, for two years, was working on the Crash Rescue Unit at Kindley Air Force Base in Bermuda, where he also met his wife Anne who was on Spring Break from college. As someone who truly loved helping others, Norman dedicated much of his life to serving the residents of Attleboro, MA as a firefighter with the Attleboro Fire Department. He strictly embodied what it meant to be a steadfast and loyal civil servant by making a difference in the city he served as well as the department in which he worked. Throughout his 35 years of being a firefighter, Norman was very active and held various roles within the many fire houses across the city. During his time as an Attleboro firefighter, he was a very dynamic and passionate member of IAFF Local 848. Norman served in many capacities within, including a stint as the President of the local chapter and also in various roles on the Executive Board. He truly personified what it meant to serve with honor, tradition, and pride, which in 1984, led to him being one of the founding members of the Attleboro Fire Honor Guard. He was a very active participant within and the effort he dedicated to the Honor Guard is a contributing factor to the progress they have made in present day. Over his many years as a firefighter, Norman gathered a vast wealth of knowledge and experience in handling many different situations. With the desire to pass down what he learned, Norman gained the reputation for taking the time to teach and provide first-hand mentoring to young firefighters new to the job. The advice, instruction, and training he offered has been and will be passed down within the department for years to come. For over 45 years, he was a member of the Memorial Baptist Church in Seekonk, MA. In his spare time, Norman enjoyed working on projects around the house and also loved teaching his children everything he knew, such as WWII history, carpentry, auto repair, plumbing, and electrical just to name a few. He was a “jack of all trades”, and there was no job that he could not handle, a trait which coincides with his career. Norman was known by many for his kindness and his want to help people anyway he could. Perhaps, above all, Norman treasured all the time spent and the memories made with his dear family and firefighter brothers and sisters. In addition to his wife, Anne, Norman is survived by his proud and loving children: Scott Slater of South Attleboro; Timothy Slater and his wife, Amber, of South Attleboro; and Amy Slater of Pawtucket, RI. He will be dearly missed by his siblings, all public servants: Thomas Slater, retired Cumberland Firefighter and his wife Janet, of Foster, RI; Leda Slater, a retired Bellingham, MA teacher, of South Attleboro; Raymond Slater, a retired Attleboro Firefighter, of Port Charlotte, FL; and Pauleen Slater, a retired Registered Nurse, sister-in-law of Norman and wife of the late Kenneth R. Slater of Cumberland, RI. He will also be remembered by his cousin: Thomas Glad and his wife, Connie of Cumberland, RI; and by his many nieces and nephews as well as grand nieces and nephews. Norman will also be missed by his large family of First Responders and friends. In addition to his parents, Norman is predeceased by his brother, a former police officer, Kenneth R. Slater and also his Aunt Helen R. Slater of Cumberland, RI and his Aunt Beatrice (Slater) Glad. Relatives and friends are invited to attend a visitation on Thursday, July 25, 2019 from 4 to 8 p.m., at the Duffy-Poule Funeral Home, 20 Peck Street, Attleboro. A funeral service will take place on Friday, July 26, at 10 a.m. at Memorial Baptist Church, 340 Central Ave, Seekonk, MA 02771. There will be no funeral procession from the funeral home prior to the commencement of the church service. Following the funeral service, burial with a Fire Department Last Alarm as well as Military Honors will take place at North Purchase Cemetery, 825 North Main Street, Attleboro. In lieu of flowers, donations in Norman’s name may be made to the “Providence Canteen”, Providence Special Signal Fire Association, P.O Box 25009, Providence, RI, 02905 or the Kidney Foundation at the following web address: https://www.kidney.org/support

SOUTH ATTLEBORO- Norman R. Slater, 73, of South Attleboro, MA and a former longtime resident of Seekonk, MA, passed away surrounded by the love, comfort, and care of his family on Monday, July 22, 2019 at the HopeHealth Hulitar Hospice Center... View Obituary & Service Information

The family of Mr. Norman R. Slater created this Life Tributes page to make it easy to share your memories.

Send flowers to the Slater family.