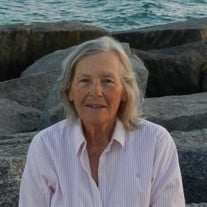 ATTLEBORO – Nora Walsh, 89, of Attleboro, devoted and beloved wife of Jack Walsh who passed on January 13, 2019, entered eternal rest on their 63rd wedding anniversary to be by Jack’s side on February 4, 2019. Nora was born on September 1, 1929 in Connemara, Ireland, and was a daughter of the late Peter and Maria (Folan) Feeney. Nora emigrated from Ireland to the United States in 1950. She was married to Jack and was a homemaker and loving wife and mother to her four children, together they raised their family in Attleboro. Along with her husband Jack, an avid boater, they traveled extensively in the waters off Cape Cod, the Islands, Narragansett Bay, up and down the East Coast and where she would spend her winters in Fort Lauderdale, FL. Together with Jack she spent many years boating the Great Loop with her children and grandchildren, all of whom have fond memories and stories about these excursions. The most heartfelt love and thank you to Nora’s beloved care giver and daily companion, Joanne Cook, also a special thanks to the Community VNA of Attleboro. Nora is survived by her cherished children, John G. Walsh III and his wife Cheryl (Jorde) of North Attleboro, Thomas P. Walsh and his wife Jane (Dean) of Attleboro, Maureen A. (Walsh) Jorde and her husband Shawn Jorde of North Attleboro, and David M. Walsh and his wife Constance (Delaney) of Falmouth; her grandchildren, John M. Walsh and his wife Ashley, Bryan J. Walsh and his wife Jessica, Jeffrey D. Walsh and his wife Rebecca, Jennifer A. Scioli and her husband Frank, Gregory A. Walsh and his wife Ashlee, Kristen E. Walsh, Lauren E. Walsh, Emily K. Walsh, Alexandra M. Jorde, Kevin D. Walsh, Steven D. Walsh; her great grandchildren, Theodore, Jackson, Vincent, Emerson, Nora and Elizabeth Walsh and Olivia Scioli; many cousins, nieces, nephews both here in the U.S. and Ireland and two special nieces, Maire (Maureen) and Noirin (Noreen) both of Ireland. Nora was the grandmother of the late Nathan A. Jorde and sister of the late Mary Curran, Peggy Conneely, Julia Kelly, Joseph Feeney, Bridget Folan and Sarah Feeney. Visitation will be held privately. A Mass of Christian Burial will be held at 10 A.M. on Saturday, February 9, 2019 in St. John the Evangelist Church, 133 North Main St., Attleboro, Massachusetts. Interment will follow in the St. John's Cemetery, Attleboro, MA. In lieu of flowers, donations in the memory of Nora may be made to the Community VNA, Development Office, 10 Emory Street, Attleboro, MA 02703 or directly at https://www.communityvna.com/get-involved/donate-to-cvna/

ATTLEBORO &#8211; Nora Walsh, 89, of Attleboro, devoted and beloved wife of Jack Walsh who passed on January 13, 2019, entered eternal rest on their 63rd wedding anniversary to be by Jack&#8217;s side on February 4, 2019. Nora was born on September... View Obituary & Service Information

The family of Mrs. Nora Walsh created this Life Tributes page to make it easy to share your memories.