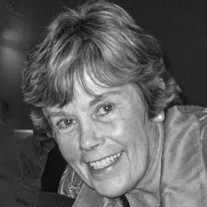 Noel Nerney-Lomas, of Attleboro, passed away Friday, April 17 after a valiant 21-month battle with pancreatic cancer. The world has lost a magnificent woman and we are all the richer for having had her in our lives. Noelie, as she was known to her friends, was born in Attleboro, the daughter of Paul and Carolyn (Gilroy) Nerney was a graduate of St. Xavier's Academy and Bridgewater State University. She was very proud of her Irish heritage and enjoyed visiting Ireland. She taught for 30 years in the Attleboro School System at the Willett, Richardson, Bliss, Wamsutta and Peter Thacher schools. After retirement, she taught English to Japanese engineers at Texas Instruments, immersing them in the language through the sports pages and, of course, converting them to be Red Sox and Patriots fans. She loved this job and became a sort of social worker to them and their families. She regularly played tennis into her 70’s and was an avid sports fan, attending Wimbledon twice and three Super Bowl Games. Anyone who met Noelie wanted to be her friend. Her social calendar was always filled with travels, dinners, lunches and other excursions with her many, groups of life-long friends: the Guild, the Bookclub, the Gourmet group (who only made reservations), the Tuesday and Thursday tennis groups, the Scrabble group, the 66ers and the Leggerts. The list is endless and she showered her love on all these people. After retirement she became nanny to friends' children, especially those of Ed and Barbara Bayly and Pete and Anne Fay, Carol and Urs Joder, Sharon Mullane and caretaker to friends’ elderly parents. Noelie had a keen sense of humor, and in her generosity, she loved surprising her many friends. If you were a recipient of a package in the mail with no return address or, a pot of flowers on your doorstep, you could have been sure they had "Noelie's fingerprints all over it"! Noelie was predeceased by her husband Nathaniel D. Lomas. She is survived by her brother Daniel Nerney of Portsmouth RI, stepchildren Sara Prescott and Christopher and Duncan Lomas. She leaves behind a multitude of friends who will miss her dearly. Her family wishes to thank her doctors at Dana Farber and at Sturdy Memorial, especially Dr. Sharon Mullane and Dr. Kenneth Bishop. Special thanks to her devoted cousins, Mark and Marybeth Gilroy, for their care and attentiveness throughout her illness, and to her devoted aide, Kathy Attanasio. Due to restrictions of the current pandemic, a Memorial Mass and reception will be held at a later date, when all who cherished Noelie can come together to celebrate her life. Contributions in her memory can be made to Dana-Farber Cancer Institute: www.danafarber.org or the Jimmy Fund www.jimmyfund.org/gift

Noel Nerney-Lomas, of Attleboro, passed away Friday, April 17 after a valiant 21-month battle with pancreatic cancer. The world has lost a magnificent woman and we are all the richer for having had her in our lives. Noelie, as she was known... View Obituary & Service Information

The family of Mrs. Noel Nerney-Lomas created this Life Tributes page to make it easy to share your memories.

Customized sympathy cards. Mailed for you.