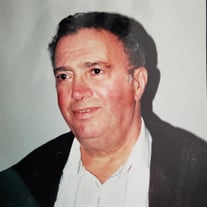 TAUNTON – Noe M. Barbosa, 79, of Taunton, formerly of Attleboro, passed away in his home on Tuesday, August 20, 2019 surrounded by his loving family. He was the husband of Maria E. Barbosa of Taunton and husband of the late Maria A. Barbosa. Born on February 28, 1940 in St. Michael, Azores, he was a son of the late Jose and Maria (Rocha) Medeiros. Before moving to Taunton 18 years ago Noe resided in Attleboro. He was employed by Larson Tool & Stamping Company as a dye stamper for several years before his retirement. Noe enjoyed watching soccer, football, working in the yard, building projects and attending Portuguese festivals. He was member of the Portuguese-American Civic Club in Taunton, the Taunton Sports Club and longtime communicant of the former Holy Ghost Church now the St. Vincent de Paul Church in Attleboro. Noe loved spending time with his family and was a man of few words but one of strong kind actions who was loved and adored by family and friends. In addition to his wife Maria E., Noe is survived by his children, David Barbosa of Attleboro, Michael Barbosa of Warwick, Lenita Barbosa of Attleboro, Michelle Rose of Rehoboth and Robert Melo of Ohio; his grandchildren, Carisa Hawes of Attleboro, Devon Hawes of Attleboro, Nathan Hawes of Attleboro, Taylor Barbosa of Warwick, RI, Michael David Noe Barbosa of Coventry, RI, Kayla Rose of Taunton, Anthony Rose of Rehoboth, Megan Melo of Ohio and Jake Melo of Ohio; his great grandchild, Liam Hawes of Attleboro; his siblings, Eduarda Almeida and Ines Medeiros both of Attleboro; Noe is also survived by many nieces, nephews, cousins and extended family members. Noe was the brother of the late Joe Medeiros, Agueda Ventra and Fernanda Bettencourt. Relatives and friends are invited to attend a visitation from 4-8 p.m. on Friday, August 23, 2019 in the Duffy-Poule Funeral Home, 20 Peck Street, Attleboro. A funeral will be conducted on Saturday, August 24, 2019 at 8:30 a.m. from the Duffy-Poule Funeral Home, followed by a Mass of Christian Burial at 9:30 a.m. in St. Vincent de Paul Parish, 71 Linden Street, Attleboro. Burial will follow in the St. John’s Cemetery, Attleboro.

TAUNTON &#8211; Noe M. Barbosa, 79, of Taunton, formerly of Attleboro, passed away in his home on Tuesday, August 20, 2019 surrounded by his loving family. He was the husband of Maria E. Barbosa of Taunton and husband of the late Maria A. Barbosa. Born... View Obituary & Service Information

The family of Mr. Noe M. Barbosa created this Life Tributes page to make it easy to share your memories.

Send flowers to the Barbosa family.