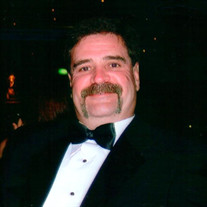 NORTH ATTLEBORO - Michael G. Hagopian, 63, of North Attleboro, passed away peacefully at his home, surrounded by family and friends, on Sunday, May 20, 2018. Born in Attleboro on July 9, 1954, he was the devoted son to the late Gabriel and Lee (Suprenant) Hagopian. Michael grew up in North Attleboro and attended North Attleboro Public Schools. He graduated from North Attleboro High School with the Class of 1972. Until his well-deserved retirement, he was the director of tool and dye at Stuller, and was previously employed at Hilsinger Corp and Englehardt industries. In his spare time, Michael enjoyed fishing and also playing his guitar. With such a passion for music, Michael also used his skills to design and make guitars, as well as write music. Michael’s musical talent was put on display in the 1970’s, where he played guitar in his two bands, the Joshua Fox Band and the Probers. Michael is survived by his cherished siblings, Lisa Myette and her husband Walter of North Attleboro and Laurie Beauvais of North Attleboro; his nephews, Chas Jette, Trent Marsella, and Brandon Beauvais; his nieces, Jennifer and Emma Jette and Giana Marsella; and also many treasured friends. In addition to his parents, Michael is predeceased by his sister, Deborah Jette. Relatives and friends are invited to attend a visitation on Thursday, May 24, from 4 -7 p.m. in the Duffy-Poule Funeral Home, 20 Peck St. Attleboro. A funeral will be conducted on Friday, May 25, at 11 a.m. from the Duffy-Poule Funeral Home, followed by a Mass of Christian Burial at 12 p.m. in St. Mary of the Immaculate Conception Roman Catholic Church, 14 Park Street, North Attleboro. Burial will follow in St. Mary’s Cemetery, Towne Street, North Attleboro.

NORTH ATTLEBORO - Michael G. Hagopian, 63, of North Attleboro, passed away peacefully at his home, surrounded by family and friends, on Sunday, May 20, 2018. Born in Attleboro on July 9, 1954, he was the devoted son to the late Gabriel and... View Obituary & Service Information

The family of Mr. Michael G. Hagopian created this Life Tributes page to make it easy to share your memories.

Send flowers to the Hagopian family.