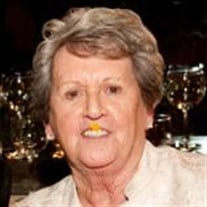 ATTLEBORO- Mary Eagelston (McGeoch) Rullo, 90, of Attleboro passed away on Wednesday, September 8, 2021 at the Life Care Center of Attleboro. She was the wife to the late Dr. Fiore Rudolph Rullo for 65 years. Born on March 9, 1931 in Pelham, MA she was a daughter of the late Charles and Ellen (Standish) McGeoch. Mary grew up in Malden, resided in Attleboro for 30 years, Harwich for 20 years, and the last 12 years back in Attleboro. She graduated from Malden High School and then attended Massachusetts Memorial Hospital School of Nursing where she earned her registered nursing license. Mary was a member of the former Highland Country Club in Attleboro and the Cranberry Valley Country Club in Harwich. She was a communicant of St. John the Evangelist Church in Attleboro and St. Pius the Tenth Church in Yarmouth. She taught CCD at St. John’s and volunteered serving meals at St. Pius. Mary loved sewing, knitting, weaving and crewel embroidery. She sewed and knit outfits for herself, daughters and grandchildren and made quilts for many family members. Mary enjoyed embroidering Christmas stockings for her children, their spouses and her grandchildren. She also embroidered pictures for each of her children. She loved playing golf, tennis and traveling. She is survived by her children, Steven Rullo with his wife Tina of North Attleboro, Susan Wendell with husband Neil of South Kingstown, RI, Patricia Rullo of Attleboro, Thomas Rullo with wife Amy of Mashpee, David Rullo with wife Sande of Mansfield and John Rullo of Cumberland, RI; her grandchildren, Alex Rullo with wife Stephanie, Benjamin Rullo with wife Angela, Jennifer Kosek with husband Stanley, Brian Wendell with wife Kristina, Rebecca Phillips, Sarah Brown with husband Peter, Jessica Rullo, Anthony Rullo and Michael Rullo; her great grandsons, Duke Wendell, Theodore Brown and Cooper Brown. She was the sister of the late Charles (Chick) McGeoch. On behalf of Mary’s children, a special thanks to the Life Care Center of Attleboro for their compassionate care of their mother. Private funeral services will be held by the family. In lieu of flowers, donations in Mary Rullo’s name may be made to the Community VNA Hospice Care, 10 Emory Street, Attleboro, MA 02703.

ATTLEBORO- Mary Eagelston (McGeoch) Rullo, 90, of Attleboro passed away on Wednesday, September 8, 2021 at the Life Care Center of Attleboro. She was the wife to the late Dr. Fiore Rudolph Rullo for 65 years. Born on March 9, 1931 in Pelham,... View Obituary & Service Information

The family of Mrs Mary E. Rullo created this Life Tributes page to make it easy to share your memories.

Send flowers to the Rullo family.