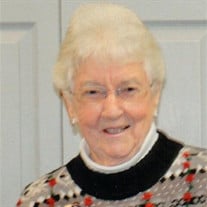 WAREHAM- Mary F. Galligan, 96, of Wareham and formerly of Attleboro, passed away on Tuesday, January 23, 2018 at Wareham HealthCare. She was the beloved wife to the late Charles M. Galligan, who passed away December 16th, 2007. Born in Attleboro on December 23, 1921, Mary was the dedicated daughter to the late John and Julia (McBride) Keane. Mary grew up in Attleboro and attended Attleboro Public Schools and was a graduate of the Class of 1939. After high school, she attended and graduated from Bryant College. After being employed by Evans Case Co. in North Attleboro and Leach & Garner Co. in Attleboro, she married the love of her life, Charles, on October 26, 1946 in St. John’s Church in Attleboro. Mary and her husband had four sons. After they were in school, she worked as a bookkeeper for John G. Walsh Construction Co. and Franklin Miller & Sons in Attleboro Falls. Following her husband’s retirement from Mass Electric Co. (now National Grid), Mary retired to her summer place in Wareham. Mary and her husband thoroughly enjoyed retirement. They were both avid golfers, and spent a lot of time playing at Little Harbor Golf Course, where Mary was an honorary life member. During her many rounds of golf, Mary was able to achieve three hole in ones. She was also the treasurer of the Little Harbor Women’s Golf Association for 15 years. Besides golfing, Mary also enjoyed bowling with the Coffee & Donut League at Ryan’s Bowling in Buzzards Bay. However, her best enjoyment was her many trips to Ireland with family and friends to visit her relatives. Mary is survived by her four sons, Robert Galligan and his wife Ellen of Attleboro, John Galligan and his wife Eileen of Attleboro, Paul Galligan and his wife JoAnn of Pocasset, MA, and James Galligan and his partner Karen Ryan of Osterville, MA; five grandchildren and four great-grandchildren; and also several nieces, nephews, and cousins. In addition to her husband and parents, Mary was predeceased by her siblings, John P. Keane, Cyril B. Keane and Robert E. Keane. Relatives and friends are invited to attend a visitation from 9 – 10:30 a.m. on Friday, January 26, 2018 in the Duffy-Poule Funeral Home, 20 Peck Street, Attleboro. A Mass of Christian Burial, will follow at 11 a.m., in St. John the Evangelist Church, 133 North Main St., Attleboro. Burial will follow in St. John’s Cemetery, West Street, Attleboro. In lieu of flowers, donations in Mary’s name may be made to a charity of your choice.

WAREHAM- Mary F. Galligan, 96, of Wareham and formerly of Attleboro, passed away on Tuesday, January 23, 2018 at Wareham HealthCare. She was the beloved wife to the late Charles M. Galligan, who passed away December 16th, 2007. Born in Attleboro... View Obituary & Service Information

The family of Mrs. Mary F. Galligan created this Life Tributes page to make it easy to share your memories.

WAREHAM- Mary F. Galligan, 96, of Wareham and formerly of Attleboro,...

Send flowers to the Galligan family.