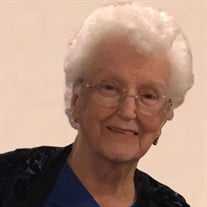 Mary (Wilson) Cote of Attleboro, passed away peacefully on Monday, May 2, 2022, at 89 years of age. She was the wife of the late Roland Cote. Born in Pawtucket, RI on March 21, 1933, the daughter of the late Clarence and Anna (McKenna) Wilson. She graduated from Sacred Heart High School in Pawtucket, Class of 1950 as Class President and Valedictorian. Mary was 16 when she met Roland at a YMCA dance in Pawtucket. They married in 1953, moved to Attleboro and began their family. They were loving parents who were proud of the fact that they were able to send all 8 children to Bishop Feehan High School. Mary was a member of St. Theresa’s Church, South Attleboro from 1953 until 2022. There she served as a Lector, Eucharistic Minister and was a member of the Women’s Guild. Mary was an avid reader who enjoyed many genres of books, but historical romantic novels were her favorite. She had a sharp mind and memory until just a few days before her passing. Talking on the phone was one of her favorite things. Keeping up with family and friends was important to her. Just don’t dare call at 7:30 when Jeopardy is on! Mary was a loving mother to Rev. Mr. Stephen Cote and his wife Ellie of Westerly, RI; Thomas Cote and his wife Lisa of Seekonk; James Cote and his wife Albie of Newton; Robert Cote and his wife Louise of North Attleboro; Mary Proia of Attleboro; Elizabeth Sigsbury and her husband Bill of Lynnfield; John Cote of Paxton; and Paul Cote and his wife Naomi of Tokyo, Japan. She leaves nineteen grandchildren and eleven great grandchildren, with number 12 due in November. She was sister to the late James Wilson; sister-in-law to the late Viola Wilson and mother-in-law to the late Captain David Proia, APD. Mary also leaves several nieces, nephews, family and friends. Included in those friends, are the remaining members of the “Friday Nighters”, a group of her high school friends. In their later years, they called themselves the “Ladies Lunching”. Meeting every Thursday until March of 2020. She wanted everyone to know that she had a great life and she could not have asked for a better one. Mary left this earth feeling blessed and loved. She also would like to remind everyone, especially her grandchildren, to “always give second chances”. In lieu of flowers donations can be made to St. Theresa’s Food Pantry, 18 Baltic St. South Attleboro, MA, 02703. Relative and friends are invited to attend visitation on Thursday, May 5, 2022 from 4-7 PM at Duffy-Poule Funeral Home, 20 Peck Street, Attleboro. A Mass of Christian Burial will take place at 11 AM at St. Theresa of the Child Jesus Church, 18 Baltic Street, Attleboro. Burial will follow at St. John’s Cemetery, 165 West Street, Attleboro.

Mary (Wilson) Cote of Attleboro, passed away peacefully on Monday, May 2, 2022, at 89 years of age. She was the wife of the late Roland Cote. Born in Pawtucket, RI on March 21, 1933, the daughter of the late Clarence and Anna (McKenna) Wilson.... View Obituary & Service Information

The family of Mrs. Mary (Wilson) Cote created this Life Tributes page to make it easy to share your memories.

Mary (Wilson) Cote of Attleboro, passed away peacefully on Monday,...

Send flowers to the Cote family.