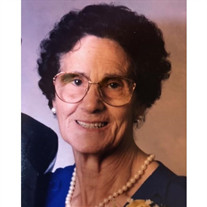 ATTLEBORO – Maria C. Garcia, 92, of Attleboro passed away surrounded by her loving family on Thursday, October 4, 2018 in the Sturdy Memorial Hospital after a short illness. She was the loving wife of the late Joseph F. Garcia who passed away in April 2008. Born on August 13, 1926 in St. Michael, Azores, she was a daughter of the late Manuel Mello and Gestrudes (Carvalho) Alves. Maria settled in Attleboro in 1960 and was employed at Shields Manufacturing in Attleboro for 7 years as a jewelry packer, later working for L.G. Balfour in Attleboro for over 20 years as a jewelry bench worker until her retirement at age 62. Maria was a longtime communicant of the St. Vincent de Paul Parish in Attleboro and she treasured spending time with her grandchildren and great grandchildren. She is survived by her two sons, Joseph Garcia Jr. and his wife Teresa of Attleboro and Tony Garcia and his wife Maria H. of Attleboro; her daughter, Mary Margaret Carvalho and her husband Joseph of Attleboro; five grandchildren, Susan Leroux and her husband William, Mike Garcia and his wife Ana, Julie McGee and her husband Steven, Kathy Rocchio and her husband William and Jennifer Ryan and her husband Matthew; 10 great grandchildren; a brother, Manuel Alves of St. Michael, Azores; a sister, Maria L. Garcia of Attleboro and many nieces and nephews. She was the sister of the late Ines Alves. Relatives and friends are invited to attend a visitation on Wednesday, October 10, 2018, from 5 to 8 p.m., in the Duffy-Poule Funeral Home, 20 Peck St., Attleboro. A funeral will be conducted on Thursday, October 11, 2018 at 9:30 a.m., from the Duffy-Poule Funeral Home followed by a Mass of Christian Burial at 10:30 a.m. in Saint Vincent de Paul Church, 71 Linden Street, Attleboro. Burial will follow in the St. Stephen’s Cemetery, Attleboro.

ATTLEBORO &#8211; Maria C. Garcia, 92, of Attleboro passed away surrounded by her loving family on Thursday, October 4, 2018 in the Sturdy Memorial Hospital after a short illness. She was the loving wife of the late Joseph F. Garcia who passed... View Obituary & Service Information

The family of Mrs. Maria C. Garcia created this Life Tributes page to make it easy to share your memories.

Send flowers to the Garcia family.